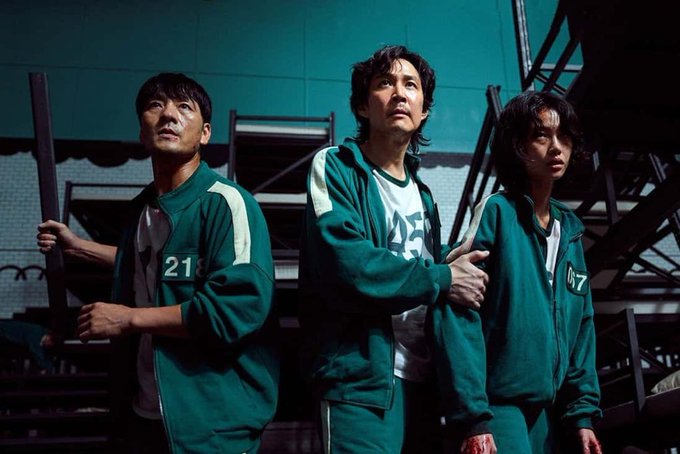 The student smuggled and sold copies of the hit show inside their high school. Photo: Twitter

A North Korean man will reportedly be executed after smuggling copies of Netflix’s smash hit Squid Game into the country and selling them.

Radio Free Asia said sources had told it seven high school students were caught watching the Korean-language global hit, after the smuggler brought copies into the country from China.

The series were then sold on flash drives, including to seven high school students. They have been arrested, according to RFA.

One student received a life sentence while six others were sentenced to five years’ hard labour. There are reports the lone student escaped hard labour because his family paid off authorities with $US3000 ($A4170).

Teachers and school administrators were apparently fired and banished to work in remote mines.

The smuggler was to be executed by firing squad, RFA said.

It is reportedly the North Korean government’s first application of its ‘Elimination of Reactionary Thought and Culture’ law in a case involving minors.

The harsh law carries a maximum penalty of death for watching, keeping, or distribution of media from “capitalist countries” – including South Korea, where Squid Game was filmed and produced.

Hellbound has skyrocketed to the top of the streaming service’s most-watched shows around the globe after premiering less than a week ago.

It rocketed to the top of the most-watched list in just 24 hours – a feat that took Squid Game eight days to achieve.

The series also topped the highly-anticipated second season of Tiger King, which racked up 30,030,000 hours watched.

Hellbound is based on the original webtoon-turned-graphic novel by Yeon Sang-ho, who is also the series’ director.

It follows the arrival of supernatural creatures on Earth who condemn people to hell, implying their souls will suffer in hell for all eternity.

The revelation plunges Earth into a dystopian society, governed by radical religious cults.

The rankings are noted on Netflix’s most-watched lists, which the streaming service launched last week.

The tool allows users to toggle between time periods, TV shows and movies, with the metric of ‘hours watched’ ranking each title.