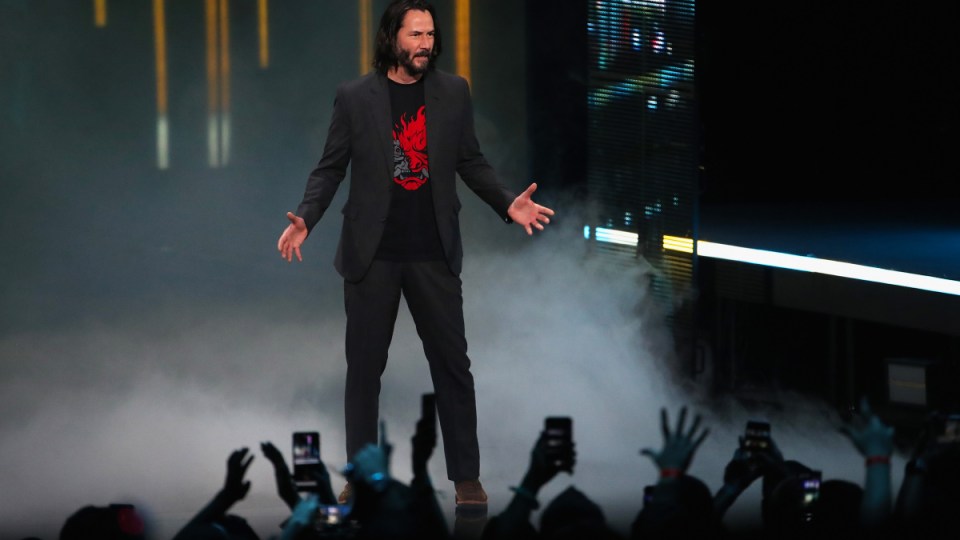 He was always breathtaking, but an audience member's reminder that he was just that, inspired even more fans. Photo: Getty

Hollywood’s kindest actor, Keanu Reeves, is again making headlines for all the right reasons, after revelations his Speed co-star would love to make his 68th movie with him before they get too old.

Speaking to Esquire magazine in a long-form feature and photo shoot for a profile on the 57-year-old Matrix and John Wick star, Sandra Bullock shared her take on the master, suggesting they could make their third movie together – “an old-people Cocoon thing”.

Bullock, 57, was one of several female co-stars who shared candid and personal stories to Esquire, about why Reeves has become immortalised as the most generous, excellent, thoughtful and caring celebrity ever.

Reeves and Bullock worked together on the 1994 action thriller Speed – often described as “that Die Hard on a bus movie” – he as FBI agent Jack Traven, and Bullock, as young, gutsy Annie who saves all the passengers from death as she steers LA bus 2525 full of explosives to safety.

Bullock, who starred again with Reeves in The Lake House (2006), spoke about their bond and the moment of generosity he displayed after hanging out together a year after Speed hit cinemas, both becoming the new kids on the Hollywood block, replacing the likes of Arnold Schwarzenegger and Julia Roberts.

She recalls how they sat on the couch, poured the Champagne, opened the truffles and then “Keanu put his hands out, without a word”, and Bullock painted his nails black, same as hers.

“That’s what I mean that it drives you crazy,” Bullock told the magazine.

“When I first met him, I would spend as much time as I could filling a silence, just to feel comfortable.

“And the more I jibber-jabbered on, the quieter he would get. And I thought, I don’t understand what’s happening! He’s looking at me with eyes of confusion. He’s quiet.

“Did I say something to offend him? And then a day or two later, he would arrive with a note or a little package, saying, ‘I thought about what you said’. And he would have his response.

Bullock and Reeves had chemistry in Speed, not only after they got everyone off the bus and had a romantic moment.

When she was rescued by him on the runaway train wearing a vest full of explosives, that was another romantic moment.

Now, Bullock reckons they could do it all again.

“I would love nothing more than to do a comedy with Keanu before we die. Just laugh with him. He’s funny.

“We can be 75 – it’ll be even better then, like an old-people Cocoon thing.

“We play two funny old people. A road trip. Just put us in an RV as old people. It’ll be the bookend of Speed. We’ll just be driving really slowly. Pi–ing the world off.

Reeves, who sat down with Esquire in Paris to promote The Matrix Resurrections, the fourth instalment of movie franchise, and to film John Wick: Chapter 4, has become legendary for his random acts of kindness.

There are dozens of moments we know about, and dozens more that are disguised, including his generous donations to children’s hospitals.

He once snuck into a theatre to watch John Wick 3 in 2019, grabbing popcorn and M&M’s on the way in.

On the way out, he bought an ice cream, and kept the receipt to hand a signed autograph to a young staffer in the back room.

Also that year, while filming Bill and Ted, he stopped and spoke to fans who had left a sign out the front saying he was breathtaking.

“A few cars stopped but then a car stopped and there he was!! He actually stopped! Oh my heavens!” wrote Stacey Hunt.

He trended on Twitter after fans began noticing he doesn’t touch women when he’s being photographed with them.

He was called a “respectful king”.

In 2003, he gifted 12 Matrix stuntmen a Harley-Davidson motorcycle each after gruelling fight scenes that left them in ice baths.

HuffPost reported that after a San Francisco to Los Angeles flight he was on had to make an emergency landing in Bakersfield, he entertained fellow passengers with fun facts about Bakersfield and played Bakersfield Sound music for everyone in a van as he organised transport back for everyone to LA.

Reeves was then asked to name three films he’s made that best describe the humble star.

“I guess you could do it through my work.”

“OK, let’s just start with The Matrix – and when I say The Matrix, let’s do the trilogy – that’s one.

“Then let’s do The Devil’s Advocate [Reeves reportedly took a pay cut to get Al Pacino on board to play the Devil].

“And then let’s do … we need something action-y in there, so let’s do Point Break.”