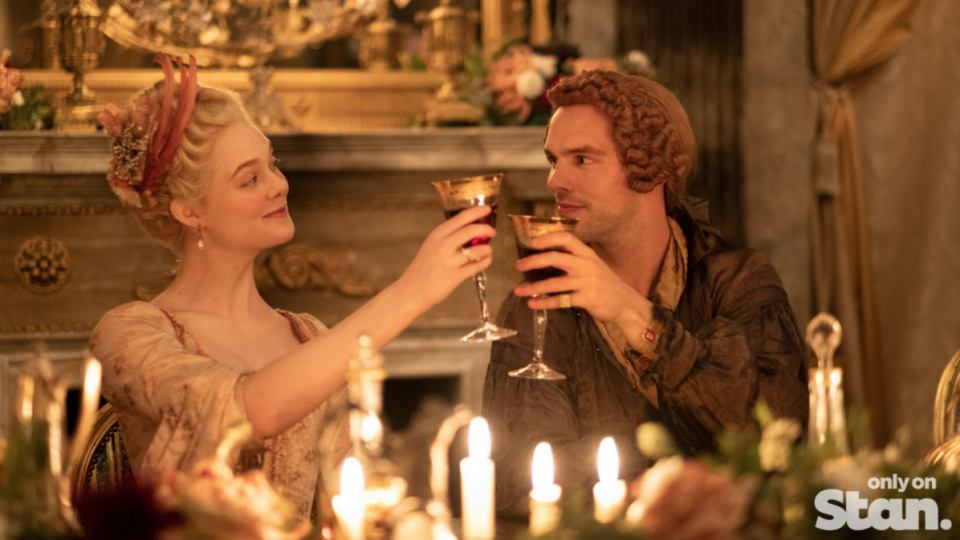 Elle Fanning and Nicholas Hoult are back, both delivering the best lines they've ever been given. Photo: Stan

As the second season of 18th-century period drama The Great hits screens in all its glory, mayhem and comedy, here’s a little-known fun fact.

Even though it’s about Russia and the rise of Catherine the Great from outsider to the longest-reigning female ruler in the country’s history – and it’s filmed in Europe – the creatives behind The Great are largely Australian.

His wife, WA-based Belinda Bromilow, 46, is part of the main cast, playing the “whimsical and mercurial” Aunt Elizabeth, whose nephew was the Emperor of Russia at the time.

McNamara, who worked on Doctor Doctor, Puberty Blues and Love My Way before earning an Academy Award nomination for co-writing the screenplay for The Favourite, actually wrote the original play The Great for a Sydney Theatre Company production in 2008.

And the last of the fun facts.

The idea was for it to then become a feature film, but McNamara rewrote it as a pilot TV script and pitched it to US networks in 2018.

That’s when Hulu commissioned a pilot episode and then a series.

According to Screen Australia, “once The Great was rewritten the writers’ room for The Great took place in NSW, and the team of writers who brought it to life also included Australians Gretel Vella and Amelia Roper”.

Speaking to SA in July last year on the pitching and making of The Great, McNamara says he wrote “the lion’s share of it because of the tone”.

“I wrote the pilot quite quickly because I’d written the screenplay and the play, so I knew the tone and I knew most of the characters. And then Nic [Hoult] and Elle [Fanning] read it and we went and sold it and that was all in a matter of maybe four or five months,” he said.

The rest is history.

The official synopsis of the Hulu/Stan series, which debuted in May last year, says the Emmy-nominated satire is a “fictionalised, fun and anachronistic story of an idealistic, romantic young girl, who arrives in Russia for an arranged marriage to the mercurial Emperor Peter”.

“Hoping for love and sunshine, she finds instead a dangerous, depraved, backward world that she resolves to change. All she has to do is kill her husband, beat the church, baffle the military and get the court onside.

“A very modern story about the past which encompasses the many roles she played over her lifetime as lover, teacher, ruler, friend, and fighter. Incorporating historical facts occasionally.”

Now back for a second season of another 10 episodes, the surprises keep coming, with acting royalty Gillian Anderson taking on the role of Catherine’s mother.

Hot off enjoying the classic role playing British prime minister Margaret Thatcher in The Crown, Anderson gets another major costume makeover, as she revealed on Twitter on November 19.

Bromilow (McLeod’s Daughters, Doctor Doctor) told Nine Entertainment on November 20 working with Anderson was “the stuff dreams are made of”.

“She is wonderful and glorious and working with her was like a masterclass. She’s just a stellar artist and she brought it all. It was pretty glorious being in her company and doing scenes with her,” Bromilow said.

Fanning’s Catherine takes the Russian throne in this second series, but now we’re not sure whether she decides she doesn’t hate her husband any more.

Either way, we’re all distracted by the classic McNamara lines he’s penned for Catherine and Peter, like Catherine’s “I look at you, and go dry, like sand”.

“You’re my wife. You honestly can’t think you can run Russia without bloodshed?

“I love that you think that.

“Should we have sex?” he asks at the dining table.

“I’d rather choke on this tiny chicken,” she replies, holding it aloft.

On the plot to kill Catherine: “It must be strange. A human creature inside you. Do you ever think, what if he has a knife?”

And is nobody going to mention how funny the “let’s just behead him, like civilised men” line is?

One fan’s observation sums it up perfectly: “Nicholas Hoult really is brilliant … Sure, the lines are excellent, but Hoult really comes to life delivering them, perhaps because it’s easily, and by quite some way, the best dialogue he’s ever been given.”

McNamara has form in feature film screenplays, and has been writing television series since 2001 soon after graduating from the Australian Film Television and Radio School in 1996.

His TV credits include Rush, The Secret Life of Us, Offspring and Puberty Blues, and developed and wrote the TV series of Star Wars for Lucas Film.

“The TV business is now a global business, and so I think writers need to see themselves in that way. You’ll always want to tell Australian stories because as a writer you’re Australian and that’s what you’re attracted to,” he said.

“But the international TV industry … is just a creatively interesting space.”

The Great season 2 is on Stan from November 20. Season 1 is also streaming.

The Great: ‘An anti-historical, occasionally true story’ with a few surprise Aussie connections