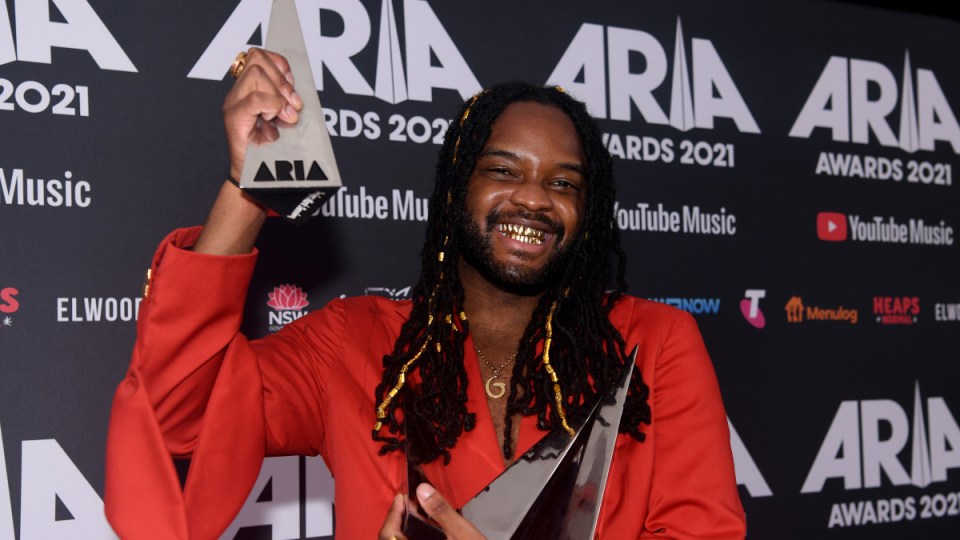 Hip-hop artist Genesis Owusu has claimed four ARIAs, including Album of the Year, at the 2021 music awards.

The singer and rapper collected trophies on Wednesday including Best Hip-Hop Release and Best Independent Release for his title Smiling With No Teeth.

And, along with Bailey Howard, he also received the ARIA for Best Cover Art.

“I used to get side-eyed a lot when I was younger for the way I dressed and the things I did,” he said at the award ceremony.

“But all the people I loved and respected always stood firm, immovable, unshakeable, because we knew the power in all we were and what we created.”

“A big shout out to my brother Justin Bieber for being a part of this record and helping me make it so special,” he said after claiming the award.

The Kid Laroi and Owusu were among a male-dominated winners list for the 2021 awards.

Congratulations to the 2021 #ARIAs Best Artist winner @thekidlaroi for Stay (with @justinbieber) pic.twitter.com/n5dvsXSu04

From a total of 27 categories, the only local solo female artist to pick up an ARIA was Zimbabwean-born Australian singer-songwriter and rapper Tkay Maidza, who took out Best Soul/R&B Release for her EP Last Year Was Weird, Vol.3.

Song of the Year was given to Booster Seat by Spacey Jane, which boasts a female bass player, Peppa Lane, alongside lead singer and guitarist Caleb Harper, drummer Kieran Lama and guitarist Ashton Hardman-Le Cornu.

Aboriginal singer-songwriter Budjerah was named Michael Gudinski Breakthrough Artist for his eponymous debut EP, with Ed Sheeran announcing the award by video and paying tribute to the late Gudinski, founder of Mushroom Records.

Troy Cassar-Daley won Best Country Album, his fifth, for The World Today, while Archie Roach, inducted into the ARIA Hall of Fame in 2020, was honoured with Best Blues & Roots Album for The Songs of Charcoal Lane.

Tropical F**k Storm, made up of Gareth Liddiard and Fiona Kitschin from The Drones as well as Lauren Hammel and Erica Dunn, won Best Hard Rock/Heavy Metal Album for Deep States.

As Australia emerges from COVID-19 restrictions, ARIA organisers pivoted from the traditional red carpet to a live audience of fur, feathers and fins, with the event live-streamed from Sydney’s Taronga Zoo.

Check out @grettaray performing Love Me Right live at the 2021 #ARIAs! https://t.co/85RayuoATU

What do zoo animals have to do with music?

Perhaps someone saw Amy Shark’s name and had a lightbulb moment. (Was Sydney Aquarium unavailable?)

In the end, neither Shark (six nominations) nor Ray (one nomination) landed a trophy.

One of the highlights of the 2021 #ARIAs, here’s @BudjerahS performing Missing You. https://t.co/IrpfoVYwMs

Album Of The Year: Genesis Owusu, Smiling With No Teeth