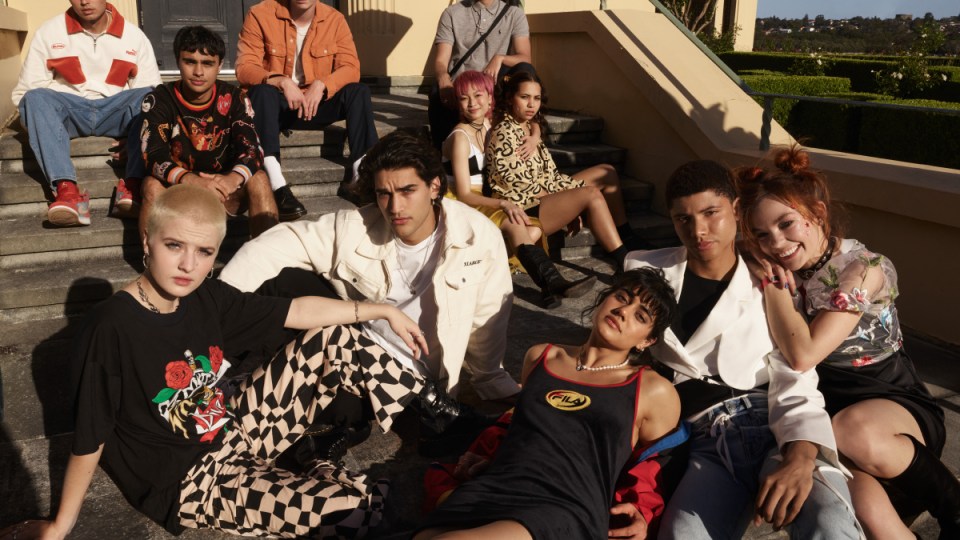 We're promised there will still be plenty of attitude and real issues on the Heartbreak High reboot. Photo: Netflix

Some world-weary television audiences may roll their eyes over the reboot of one of Australia’s most iconic and successful series, Heartbreak High, after 22 years.

Will it fall into the mixed bag of just another average 2021 teen drama, or will it again deliver up a cocktail of woke, risque teenagers, this time with 21st century problems?

After seven seasons (and 210 episodes) on free-to-air television from 1994 to 1999, the storylines back then were about teenagers dealing with life issues including love, racism, broken homes and domestic violence, homelessness and drug addiction.

It wasn’t Neighbours. It wasn’t Home and Away. It was set in inner-city Sydney and it was edgy, all cut to a beat of alternative music and pop culture.

Not that we’ve got the inside running on script lines, and while real issues about love, domestic violence and drugs will still feature, needless to say the rise of the internet, social media, TikTok, sexting and dating apps will be woven into this reboot by its band of clever writers including Marieke Hardy.

With the announcement on Monday of the cast, reimagined for a Gen-Z audience, social media has already reacted with congratulations for its “diverse” casting, with an autistic teenage girl, a lesbian, a ‘Karen’ and a drug dealer in the mix.

Netflix’s director of originals in Australia Que Minh Luu says the ’90s  series is back because “we haven’t had a rebellious Australian YA series on screen since the original Heartbreak High, so this is well overdue”.

“The new Heartbreak High is for young people in Australia today to feel seen – showcasing their stories, senses of humour and aesthetics to the world, and reminding everyone that they are much, much cooler than us.

“It’s also for the ’90s kids – fans of the original series who remember what it’s like to feel understood by a TV show, then racking off.”

They racked off, so where are they now?

Ada Nicodemou, 44, is still working in the entertainment industry, having played Leah Patterson on the Australian soap, Home and Away, for the past 21 years after HH finished.

At age 16, Nicodemou played Katerina Ioannou, who was romantically linked to another student before leaving to go to Greece and then returning in season five.

She recently told the Mamamia No Filter podcast: “I still don’t know whether I want to act. I always go, ‘I’m acting at the moment’.

“I don’t know whether it’s something I’ll continue to do.

“Maybe that’s because I like something stable. Or [because] I never feel like I’m that good at it. I just feel like it’s something that I’ve done naturally, but I haven’t trained for it, and someone’s going to realise that I’m not that great.”

Callan Mulvey, 46, played Bogdan ‘Draz’ Drazic in the show, working for two years prior to being cast on his stunt and skateboarding skills.

In 2014, he appeared in 300: Rise of an Empire as Scyllias and impressively secured the role of Jack Rollins in Captain America: The Winter’s Soldier and Avengers: Endgame in 2019.

He told The Guardian in 2020 the show struck a chord.

Vince Poletto, 49, was a great karate kid before being cast for 56 episodes playing Matt Logan, whom TV Week described as a “rebel with a cause”.

He was a surfer, got in trouble with the cops and got involved in a love triangle on the show.

He went on to score a number of roles alongside Jackie Chan, Leonardo DiCaprio, Ben Mendelsohn, John Howard and Yvonne Strahovski.

A HH Facebook fan page quoted Poletto in 2019: “I got to act each day for two years, and it was a fun time. I still keep in touch with the cast from time to time. It was a ground-breaking show led by maverick deceased producer Ben Gannon.

“I remain hopeful of doing more acting in the future. The last gig I did was in a series called Stateless (2020).”

Abi Tucker, 48, once sang on New Faces before getting the role of Jodie Cooper, who was a good singer at school in the show, and also a love interest of Logan (see above).

She has worked in live theatre, been a narrator on National Geographic, and since 2010, been a breath of fresh air on Play School (mums and kids still post to her Instagram saying how much they love her).

According to Fremantle’s executive producers Chris Oliver-Taylor and Carly Heaton, HH “allowed a generation of Aussie teens, us included, to see themselves represented on TV for the first time”.

“It was brash, fun, uniquely Australian and an international hit,” with the reboot preparing to go global again in 2022.

Introducing some of the new kids on the block

Quinni (Chloe Hayden): “She’s outrageous, raw, and sometimes a little bit wrongtown. Quinni is autistic, and a master of imitation and masking.”

Dusty (Josh Heuston): “Bass player in an indie rock band and has slept with half the girls – and even a few boys – at school.”

Sasha (Gemma Chua-Tran): “The sexiest, and ‘chicest’ lesbian at the school”.

Spider (Bryn Chapman-Parish): “A sprinkling of incel, dickhead and class clown rolled into one.”