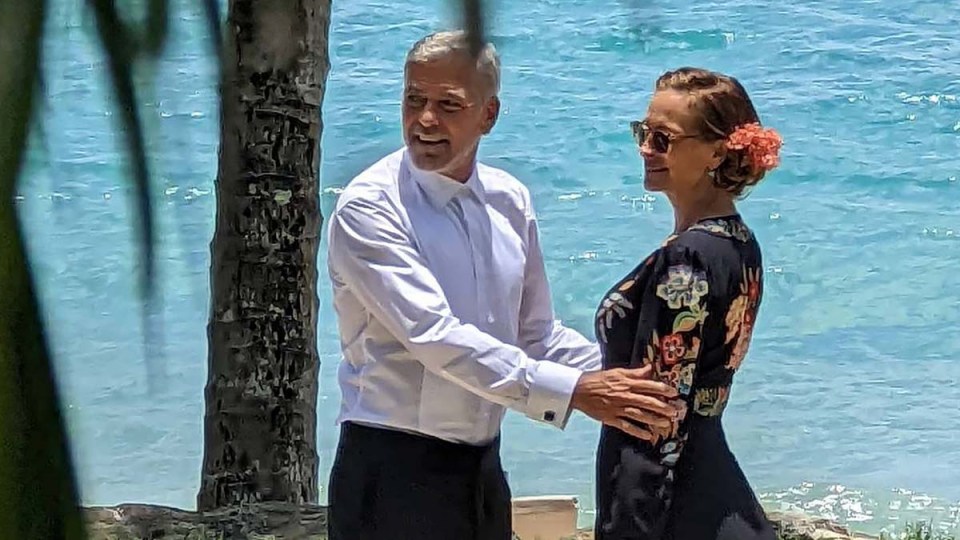 Old friends back on the movie set, this time at a mockup Balinese resort ... on the Whitsundays in Queensland. Photo: Twitter

And it appears parts of the North Queensland coastline have undergone a serious makeover.

When filming for Ticket to Paradise was announced in March – kickstarted by a $6.4 million federal arts funding boost – we knew the Whitsundays including Hamilton Island, Brisbane and the Gold Coast were locked in for production locations.

In the past week, pictures have emerged of crews transforming the beachfront of the Palm Bay Resort on Long Island (near Whitsunday Island) into Bali, with tradesmen constructing Balinese-style beach huts.

Freelance media hounds desperate for location photos found silver when they spotted star of the show Clooney, 60, kicking a soccer ball with a group of small children.

He was also pictured sitting in directors chairs on Hamilton Island on Friday.

And then they struck gold.

Photos on social media captured a rehearsal scene between Clooney and his co-star Roberts, 54, on Saturday. She wore a flowing black dress and thongs, complete with an orange marigold cluster in her hair.

For two days from November 11 to 12, a three-kilometre exclusion zone between Cid Harbour (famous for its World War II safe shipping harbour for allied forces) and Whitsunday Island was established for filming.

A notice was issued by Maritime Safety Queensland on October 28 for an “aquatic event” for the movie, preventing access to any shipping or boating activities within a tight time frame of two days.

During the past two years, Queensland has become a sought-after location for international films, Netflix series and local productions.

So far, 13 productions have been filmed across the state.

“This is definitely the biggest boom we’ve seen in terms of dollar value and job creation in the regions,” Screen Queensland chief executive Kylie Munnich told the ABC on November 14.

“We’ve had $478 million worth of production come into the state in the last financial year.

“That is the upside of being a COVID-safe production paradise.”

Academy Award winners Clooney and Roberts play a divorced couple who rush to Bali to desperately stop their daughter – played by emerging Hollywood actor Kaitlyn Dever – making the same “mistake” they made 25 years ago.

On Saturday, Clooney was spotted by Nine News wearing black tie, chatting to the film’s crew, and playing soccer with a group of child actors.

With the chutzpah that Hollywood royalty Clooney and Roberts will bring, it sets up the industry for a much better 2022.

All should go well. The pair have known each other a long time.

In Ocean’s Eleven (2001) and Ocean’s Twelve (2004), Roberts played Clooney’s on-screen ex. She then starred alongside Clooney in the 2016 thriller Money Monster.

Roberts also starred in tragicomedy August: Osage County (2013), which was produced by Clooney.

Meanwhile, Booksmart‘s Dever, 24, was named one of Variety‘s “10 actors to watch” back in 2014, and is now one of Hollywood’s top emerging stars.

She’s been in Clint Eastwood’s J. Edgar, Jason Reitman’s Men, Women & Children and was one of the female leads in Kathryn Bigelow’s Detroit.

Most recently, Dever starred in Hulu’s Rosaline and the new drama Dopesick, according to Imdb.com

Touching down in Australia on November 3, the young actor has previously said she loves doing both drama and comedy, and “showing people that I can do both”.

Producer Tim Bevan from Working Title said that he was thrilled to be bringing Ticket to Paradise to Australia.

“We have worked in Australia before and found the local crews to be extremely professional. We are looking forward to collaborating once again on this exciting project,” Mr Bevan said.

Ticket to Paradise is slated for release in October 2022.