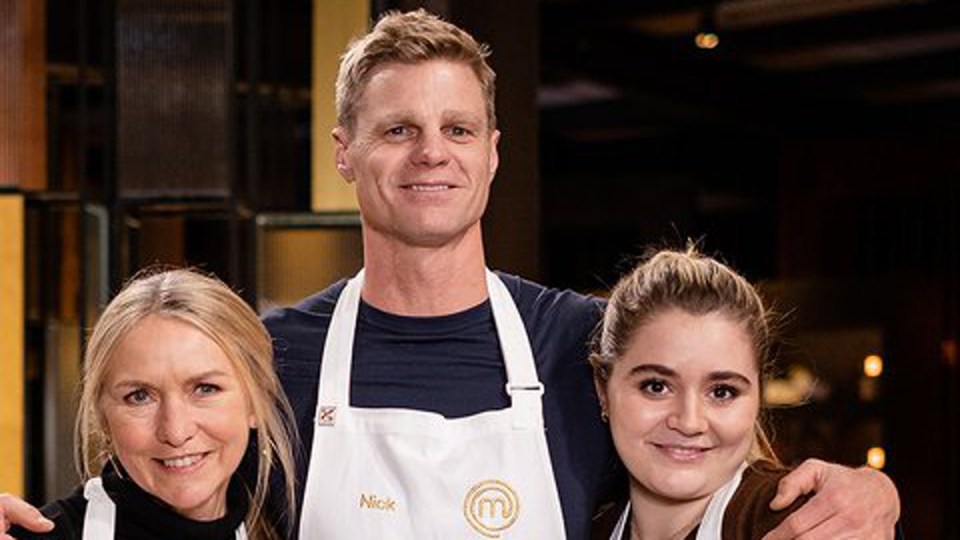 This could be former AFL champion Nick Riewoldt’s chance to finally take home the holy grail – a grand final trophy – after becoming one of three amateur cooks to secure a spot in the grand finale of Celebrity MasterChef Australia on Monday.

Riewoldt, who played 337 games for St Kilda, secured a spot in the November 22 showdown with his Middle Eastern dish of mackerel. He’ll be joined by fashion designer Collette Dinnigan and Tilly Ramsey, daughter of UK celebrity chef Gordon, who both channeled their inner competitive streak.

In a nail-biting semi-final on November 15 where five become three, Back to the Rafters actress Rebecca Gibney and comedian Dilruk Jayasinha didn’t quite nail the brief, and walked the line to the MasterChef kitchen exit in a double elimination.

Gibney didn’t use enough butter with her croquette, and Jayasinha was crushed after one of the judges broke the news he’d left a “poop chute” in his prawn curry dish.

So what were the recipes that got the other three amateur cooks over the line?

It was all about playing to their strengths and keeping their “eye on the prize”.

This time, Riewoldt is determined he’s not going to let a trophy slip away, albeit a piece of cooking silverware and not the immortalised trophy that is the AFL premiership cup.

“This is when the season starts,” says the self-confessed “psycho competitor”, who showed early on he could cook with his Heston-style “dippy eggs” dessert.

From everything he could have chosen in the pantry and garden, the Tasmanian lobster and scallop lover snapped up a couple of mackerel, and, even though he admitted he didn’t have much experience with Middle Eastern flavours, that’s what he delivered in the 90-minute cook-off.

“Right from the start, I think we were desperate just not to go home early. You want to compete and cook well, but to be a part of what we’ve built, that’s been the motivating factor for me,” he says, as the group became closer over the competition and supported each other during some hectic and gruelling cooking challenges.

He made a cauliflower hummus with harissa, and the mackerel was gently grilled on an open Hibachi flame.

When Collette Dinnigan was approached to go on the fast-paced cooking show, she initially said “No way”, she told Gourmet Traveller in October.

Nothing. In fact, she delivered a winning dish.

She grabbed two giant lobsters from the pantry, and a million ingredients which judge Andy Allen had to help cart to the bench, and then started cleverly chopping up the shellfish into select pieces for the tagine and for the meat.

Over 90 minutes, she masterfully pulled together a Moroccan lobster tagine with harissa and couscous.

“There’s a lot of art in getting the flavours and balance right and I managed to pull it off. It was quite complex. I did the best I could.”

Judge Jock Zonfrillo said he loved it, wanted to eat more of it: “It is super-delicious. Dishes like this win competitions”.

‘I’ve taken such a big risk’

It’s not an easy skill to master, that is, making homemade ravioli filled with spinach and a fully formed egg yolk.

Tilly Ramsay might have had her famous multi-Michelin-starred UK chef father Gordon sending good vibes, because at the end of what was described as a “notoriously difficult” dish, she delivered up an almost flawless plate of food.

The yolk had to be runny.

As the excitement builds and the three judges cut into the jumbos, voila!

“It takes someone daring greatly to choose a dish such like this … on a day when you’re trying to make a play for the grand final,” says judge Melissa Leong.

The judges don’t know how she did it, but she pulled it off.

After leaving the show, an emotional Gibney said her journey was right up there and had taught her so much about herself.

“I came in thinking I was a fraud, I have learnt so much. I’ve never been in such a high adrenaline state (but) I couldn’t be happier.”

Adds Jayasinha: “Looking back in the whole competition as only one of five who have won immunity, it’s something. It’s cool to be acknowledged like that.”

As the former star full forward Riewoldt says in the lead up to the “big dance” on Monday: “The trophy is on the line”.

Celebrity MasterChef Australia airs on the Ten Network and Ten Play on Demand on November 22 at 7.30pm. Along with the coveted trophy, the winner gets $100,000 for their chosen charity.