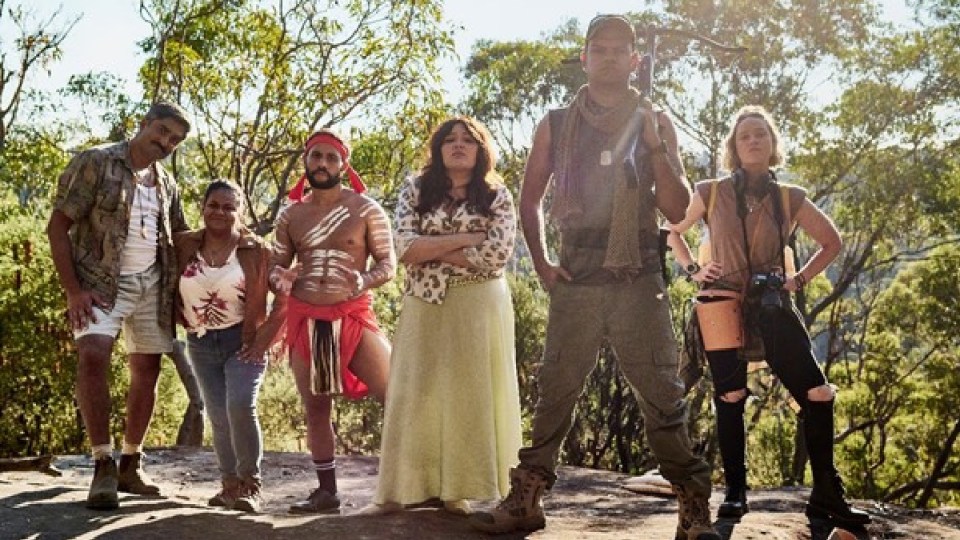 Preppers tackles some big issues, but it does it all in the great Aussie tradition of taking the piss. Photo: ABC
review

A sophisticated multi-layered critique of colonialism, capitalism and patriarchy with an all-star Aboriginal and Torres Strait Islanders cast (along with some well-known non-Indigenous personalities playing an assortment of “allies”), Preppers is hilarious.

Trying to navigate being the only Indigenous person on an all-white TV morning show, Wake up Australia, and dealing with daily microaggressions, Charlie (Nakkiah Lui) finds herself suffering feelings of inadequacy and soothing herself with self-help affirmations.

Then, after a series of unfortunate events, she wakes to find herself at a doomsday preppers holdout known as “Eden 2”.

The six-part series then unfolds in an isolated camp where power relations shift as everyone prepares for the end of the world.

The core cast of seven is led by a group of brilliant Blak actors: Lui is joined by Jack Charles, Meyne Wyatt, Ursula Yovich and Aaron McGrath, with non-Indigenous actors Eryn Jean Norvill and Chum Ehelepola rounding out the preppers.

Many other wonderful actors move in and out of the series, including Miranda Tapsell, Luke Carroll and Christine Anu, as it tackles some big issues such as colonial violence, frontier wars, inter-generational trauma and the politics of identity.

But it does this all in the great Aussie tradition of taking the piss: Making fun of the things that are absurd, risible, offensive and hurtful.

A story of allyship

Much has been written on the topic of allyship with Indigenous people, particularly the danger that, in seeking “ally” status one is really seeking to position oneself as the “good white person”.

If white allies are motivated solely by a desire to be seen as a “good person”, there is a danger they might remain ignorant of or indifferent to larger structures of power.

Preppers explores this complexity in a way that will make us all laugh, while also revealing how allyship operates to silence or take from Indigenous people.

In one episode, the group is accidentally locked in the bunker.

Jayden (Aaron McGrath) calls on Kirby (Eryn Jean Norvill) to be sacrificed before they run out of air.

As Jayden describes it, this would be “the ultimate display of white allyship”.

Kirby, not very happy to comply, responds by stating she should survive to go on and tell the story.

“We don’t need another white person to tell a Black story,” Jayden says.

Becoming an ally is no simple or straightforward matter.

Instead, it requires constant reflection on your social position, and remaining accountable to those with whom you are “allied” – but you probably won’t be called to self-sacrifice to ensure enough air is left in your doomsday bunker.

In true Hollywood end-of-days fashion, the group turns on itself. Kirby declares Charlie (Lui) will be the one to die.

Charlie’s reward will be becoming the namesake for a future child of born-again Christians Lionel (New Zealand-Sri Lankan actor Chum Ehelepola) and Kelly (Ursula Yovich). Not the first or the second child but one of the later ones, Kelly notes.

An annual day of honour will also be bestowed upon Charlie – “a day of mourning and dancing and stuff”.

Thankfully, they are saved by the arrival of Charlie’s mum, Marie (Christine Anu).

Preppers unpacks what we think we know – and what has been taught to us as truth – about colonisation.

In one scene, bones are found.

The preppers suspect the bones could be those of an Aboriginal person killed during the frontier wars.

The truth of these atrocities is questioned by some members of the group. “Don’t they teach you that in school?” Jayden asks.

“We used to make boomerangs out of Popsicle sticks, does that count?” asks Lionel.

The resident Elder, Monty (Jack Charles), reveals he may have some records of local frontier wars and quips “that is the thing with you white fellas. You deny it, but you wrote it down”.

Describing frontier violence as an apocalypse, Monty shows the group a series of slides of colonial soldiers and settlers killing Aboriginal people, declaring they were “led by a cruel man, a real dog. He shot, burnt, beat, hung local Aboriginal people”.

Even though Preppers is a comedy, the show provides a deep reading often left out of recollections of colonial violence.

Indigenous people were not just passive victims of the heinous crimes. They were people who fought for their lives and Country.

“They ambushed this colonial dog and his men, stole their weapons and turned the guns back on them. The Blackfullas had their revenge”, says Monty.

From Charlie, whose anxiety manifests into uncontrollable flatulence, to a Black Bear Grylls-alpha-male-wannabe (Guy, played by Meyne Wyatt), to a pair of amorous born-again Christians practising abstinence, Preppers includes brilliant performances from all in the cast.

Preppers embodies the true definition of Blak humour in all its intricacies, and the unique ways Indigenous comedy can address the complexities of everyday life of Aboriginal and Torres Strait Islander people in contemporary Australia.

The series is, to quote a line in one of the episodes, “like deadly, like Blackfulla deadly, not like gammin [fake or pretend]” – a must watch!

Preppers is on ABC from November 10.

Preppers is a deep reading of colonial violence – and a hilarious, must-watch Aussie TV comedy