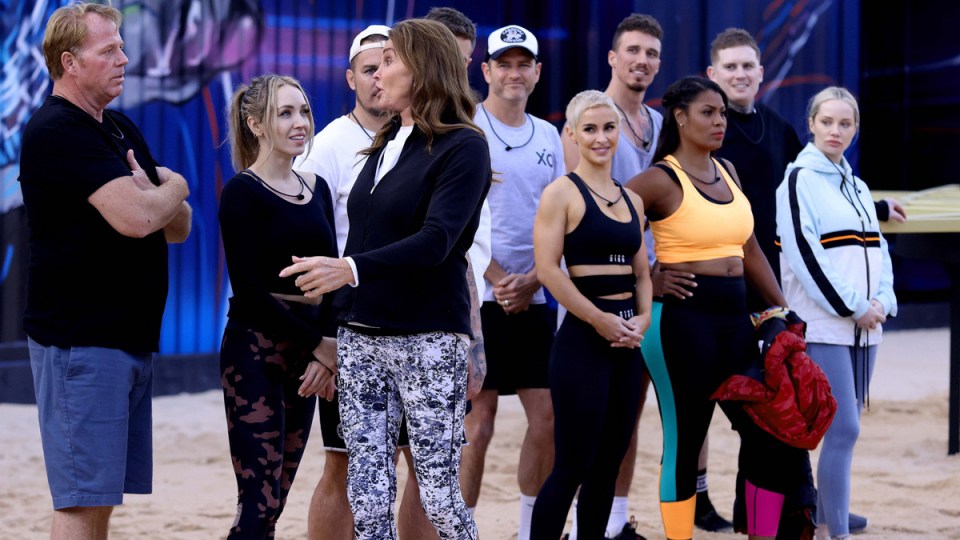 Who will win? And what will they gain by dropping family secrets, workplace issues and intimate conversations? Photo: Seven

In a scene from the most recent reality TV show to hit free-to-air television, the Duchess of Sussex’s estranged half-brother candidly shares details about his famous sister and her marriage to Prince Harry.

“The guy she was married to the first time, she just walked all over him and dumped him,” he said.

“Harry’s on the chopping block next.”

He also claimed he stood by an infamous letter he wrote to Prince Harry in 2018 where he said he begged Harry not to marry his half-sister.

“Meghan treats her family like she’s embarrassed of where she comes from. She’s very selfish, self-centred. I think she’s very shallow. You’re never that too good for anybody, ever. It’s rude to treat people like that,” he said, despite being reminded Meghan had suffered mental health issues before leaving the UK.

Then it was transgender athlete and Kardashian Caitlyn Jenner who fired up, talking about the trial of OJ Simpson, who was acquitted of the murder of his ex-wife, Nicole Brown Simpson.

“I won Olympic decathlon gold, I grew up with the Kardashian crew, I won Glamour’s Woman of the Year … I’ve gone through a lot in my life. That’s an understatement.”

”Oh, the OJ trial. Obviously, he did it and he got away with it. I was at Nicole’s house two days before the murder,” she claimed.

Hang on. It doesn’t stop there.

“It was even weirder when I had Shane Warne in my inbox the other week. He’s a freak. Some of the things he was sending me …” she said.

The New Daily has decided not to publish the majority of the comments she made in relation to Warne on the Seven Network.

Can you even trust that what these celebs are saying is true?

What is wrong with these people that they have to “bare their souls” in such a public forum, with so-called “shock confessions and intimate conversations” where the person talked about has no opportunity to respond or defend their reputations?

Does it extend their career? Make them more appealing?

All the contestants are reportedly paid to appear, with the overseas players in Jenner (pedestriantv.com reports she’s receiving $500,000) and Markle set to take home six-figure sums.

Whoever lasts the two-week stint gets $100,000 to donate to their chosen charity.

Melbourne-based personality researcher in psychology and lecturer at Federation University, Dr Evita March, says the producers are looking at a particular type of personality for this show.

“Somebody who will be sensationalist, someone who won’t pull any punches. They’ll be grandiose, they’ll be out there, hedonistic,” Dr March said.

“The game is for attention. What better topic than Meghan Markle and Harry? It’s a gold mine. People will watch. So many people hang onto that story.”

Dr March said the group of contestants were mostly C-grade personalities who are not high profiles: “This is how they will be relevant. These people aren’t dumb. They know what they’re doing and what works.

“What’s in it for them is simply attention, being relevant.”

As for Markle’s comments, Dr March says it doesn’t make him appealing “as in agreeable or likeable … but it’s appealing in that he’s controversial. It’s very strategic. [The audience] reactions are that it creates controversy and conversation, and if he wants attention, which he’s getting, then the strategy is working.”

Another contestant – since evicted – was Omarosa, a former Donald Trump aide and author who reckons her former boss is watching every minute of the show: “There’s no question in my mind he’s watching.”

When asked about her time working for Bill Clinton, former political aide Omarosa sensationally claimed: “It wasn’t just Monica. There was a whole line of women.”

When quizzed about what Mr Trump was like, Omarosa says “insane!”.

She doesn’t stop there.

Omarosa, who was director of communications in 2017, recalls a media engagement she had arranged for the former US president where she claims Mr Trump was allegedly “obsessed with the white supremacist display”.

“I was organising the opening of a civil rights museum. He [Mr Trump] was fascinated with the KKK garb.”

So why don’t Shane Warne, Mr Trump, Mr Clinton or the Duke and Duchess of Sussex get a right of reply, and how are comments made about them tested for accuracy?

“There might have to be some serious consideration of what people do say and what gets published online as that could encroach defamation,” Dr March said.

Or, “do we just take this with a grain of salt as it is. Because these are such massive claims, yet no one is talking about it. It’s almost as if we just accept that this is bathed in fiction”.

“Why are they doing this? Shock factor, being controversial. Why are people watching and digesting something that is probably a lie? Does it play into tabloid stories? We know they’re mostly rubbish.

“And how are they getting away with this?

“There should be some recourse. These are huge, heavy accusations. But it’s almost as if we know it’s … fictionalised and sensationalised, and controversial, and yet we still buy into it … it’s escapism.

“We know it’s suspended from reality, we know it’s probably fiction, but we still enjoy it.”

Big Brother Australia VIP 2 is only the second incarnation of this free-to-air format in 19 years and the first for the Seven Network under a rebranded name.

In 2002, Double J radio host and musician Dylan Lewis was the first to win the celebrity version of Big Brother, saying at the time “it was a good kind of nightmare”.

“It was not as hard as I thought it was going to be. It was actually an utter joy. We all clicked intensely well,” he said, The Sydney Morning Herald  reported at the time.

“Whoever put us all together are geniuses.”

‘Harry’s on the chopping block next’: Are the Big Brother VIP celebrities spilling fact or fiction?