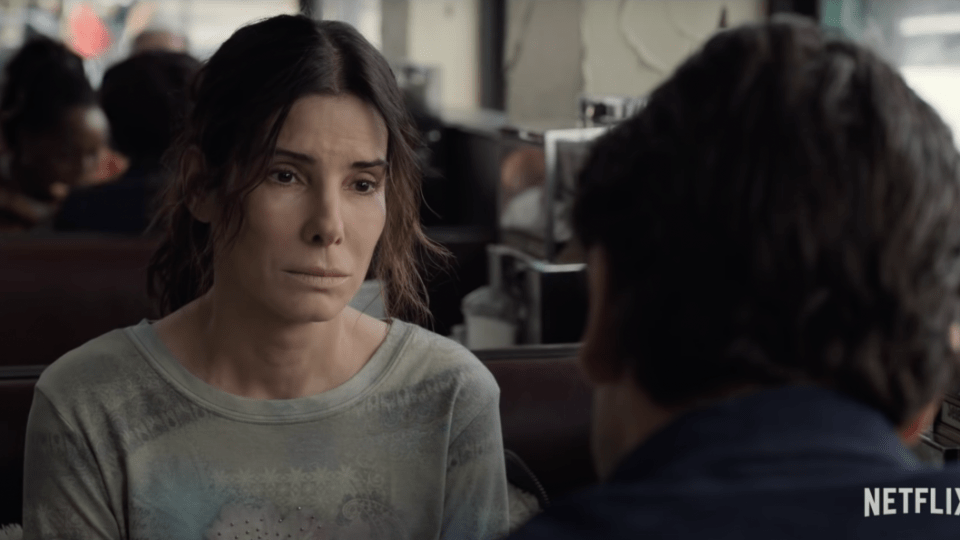 Sandra Bullock on the road to redemption in The Unforgivable. Photo: Netflix

Academy Award winner Sandra Bullock is going full speed ahead with her latest offering on the big screen.

The Unforgivable tells the story of ex-con Ruth Slater, who is released from prison after serving 20 years for murder.

Played by Bullock, Ruth looks to her local town for redemption and along the way reaches out to the younger estranged sister she was forced to leave behind.

If the release of the two-minute trailer is anything to go by, The Unforgivable has the makings of another big hit.

The story goes that Slater works hard to reintegrate into society, but the bullying at workplaces and threatening phone calls make this film feel like a compassionate look at prisoners who do their time, and just want to get on with life.

It’s not the first time Bullock has portrayed a woman on a mission, with one performance delivering her the highest Hollywood honour.

For her portrayal of matriarch and adoptive mother Leigh Anne Tuohy in the biographical drama and redemption story The Blind Side (2009), Bullock won an Academy Award for Best Actress.

She was nominated for an Oscar for playing astronaut (George Clooney also starred) stranded in space in the science fiction thriller Gravity (2013), which is her highest-grossing live-action film to date.

Critics have labelled it as the best performance of her career.

In a recent interview with EW, Bullock, 57, who is one of the producers on the film, says “finding out the background to the story of why she did what she did is sort of the whodunnit of this”.

“It’s a murder mystery within a very complex character drama,” she said.

Director Nora Fingscheidt tells EW she hopes the film triggers empathy on the touchy subject of prisoners who get a second chance at freedom.

“I would love that they maybe reconsider their judgment of people who are outside the society, people who are massively disadvantaged because of their past,” she said.

“It’s not so easy to re-enter society.

“You might change in prison after 20 years quite a lot, but for the majority out there you’re still a prisoner and you will live with that forever.

“It’s really worth looking into details and giving people second chances. That is what I was thinking about a lot.”

The Unforgivable is in cinemas from November 25 and on Netflix from December 10.

Although there have been books, documentaries and films out in various iterations since 12 Thai school boys were rescued from an underwater cave system in 2018, The Rescue promises to go one step further.

From Academy Award-winning filmmakers E Chai Vasarhelyi and Jimmy Chin (Free Solo), The Rescue has a “wealth of never-before-seen material and exclusive interviews … shining a light on the high-risk world of cave diving, the astounding courage and compassion of the rescuers, and the shared humanity of the international community that united to save the boys”.

Andrew Garfield plays a promising theatre composer who is on the brink of turning 30, navigating love, friendship and the pressure to create something great before time runs out. Netflix says it’s a guaranteed showstopper.

Daniel Craig returns as 007 one last time in the 25th instalment of the spy action thriller franchise. Opening-night tickets at the major cinema houses on November 11 are selling fast. But rest assured, the film will remain on the billboards for as long as possible to recoup some of the $250 million budget.

Venom: Let There Be Carnage – November 25

Eddie Brock (Tom Hardy) may be getting used to having an alien symbiote living inside him in this sequel, but this film must be seen on the big screen with surround sound. Fans are wondering what happens next, with cryptic Hardy posts suggesting his character may go to see Spiderman.

Dwayne Johnson, Ryan Reynolds and Gal Gadot team up for an action-packed Interpol-agents-art-thief combo. It has all the big fight scenes (of course), and this time the Netflix-commissioned movie stars all get paid the same amount. Gadot told a documentary series in April that pay parity was an “important issue”. She said: “My biggest struggle as a woman has been equal pay as my male co-stars, whom I love so much”.

Rolling Stone gave it a negative review: “Somehow, despite all the nods toward emotional complexity and women’s empowerment, all the caring, cross-cultural gestures of goodwill, the movie whittles itself down to the obvious inner and outer battles, a tepid romantic drama that goes nowhere”.

The Many Saints of Newark – November 4

Fans of The Sopranos will be thrilled to watch a young Tony grow up in Newark, hang out with New Jersey gangsters, take over the town in this prequel movie. And there’s already talks under way for an HBO Max Sopranos series. Stay tuned.

Legend of the movie world Clint Eastwood still has it in him. Reminiscent of his 2008 masterpiece which he produced and starred in, Gran Torino, this storyline has Eastwood’s character traveling down to Mexico to pick up a wayward teen on the brink of self-destruction.

Playtime (and lockdown) is over, and the kids will love heading back to the cinema for Boss Baby.

So too will the parents who look for subtlety in scripts – though some critics are unconvinced.

Returning after the first movie made more than $500 million in box office receipts (the lead voice actor is Alec Baldwin), the Dreamworks animation comedy has just two redeeming features, according to Empire: Attractive animation and the presence of Jeff Goldblum.