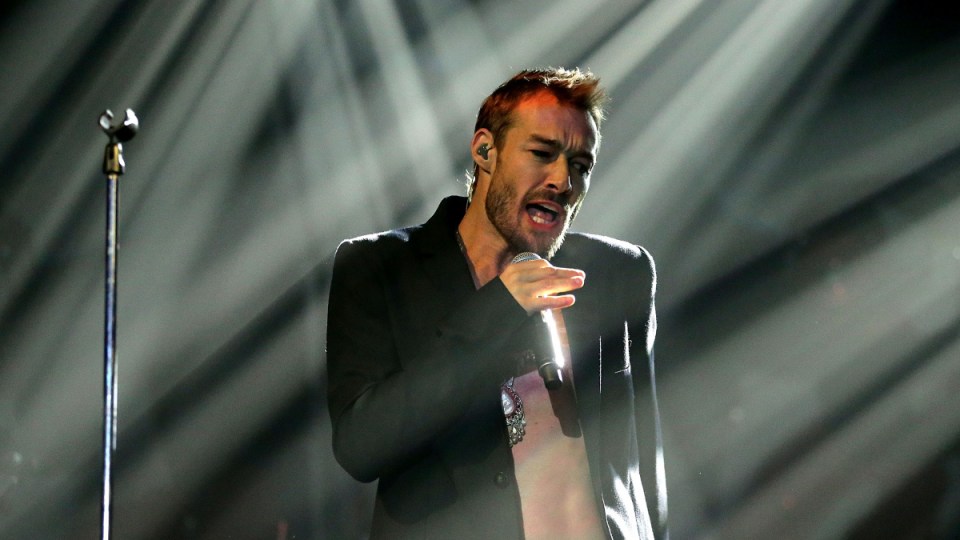 In one of his last performances, Daniel Johns at the 2015 APRA Music Awards at Carriageworks in Sydney. Photo: Getty

Thrust into a global spotlight after their 1994 album Frogstomp hit the charts both domestically and internationally, Australia’s hottest band of handsome teens – influenced by the music of Pearl Jam and Led Zeppelin – went on the road.

It turned out to be a wild ride, with Silverchair and an entourage in tow playing gigs anywhere across the US, Canada, Europe and the UK.

In their first US radio interview after their album, with recorded hit song Tomorrow peaking at No.1, the boys were buzzing after going to Disneyland.

Johns told WNNX Atlanta in June 1995 that Magic Mountain “was the best place in the whole world”.

Now, we finally get an insight into that rollercoaster Johns was on in a new five-part documentary podcast released by Spotify on October 20, which digs deeply into how he dealt with fame, the obsessed fans who threatened his safety, his marriage to Natalie Imbruglia, and the speculation when his unconventional lifestyle literally spilled out onto the streets.

For someone who rarely gives interviews, in the first episode (and then weekly) Johns, 42, tells his story as he addresses the tough questions that have surrounded his 27-year career.

In one heartbreaking moment, he gets emotional as he sits beside his close friend Paul Mac and says “I’ve got nothing to hide”, saying he “went through the trenches” with him and he’s forever grateful.

Responds Mac: “The f–king nature of fame, it’s this weird pact with the devil that somehow you didn’t even enter into. You just ended up in it and it’s affected your whole f–king life.

“Before I met you, you were probably one of the most famous people in Australia, and probably still are, and it comes with this weird set of rules that you somehow have to navigate.”

In the podcast, his manager at the time John Watson, Johns and Mac recount the horrific side of fame that specifically targeted Johns for his teenage heart-throb looks and grunge music talent.

Opening for the Red Hot Chili Peppers at Madison Square Garden, and a year after Nirvana lead singer Kurt Cobain died in 1994, his wife Courtney Love asked, ‘Who is this kid?’

With riots at concerts, teenage girls desperate for a piece of him and female stalkers following him around the world, they had to hire a security guard for Johns.

“There’s no worse feeling that looking over your shoulder all the time. I remember having to get a military security guard … I had a laugh with [him], saying show me all your sh–t … I was so bored of … being paranoid.

“He opened up his suitcase and it was … grenades, guns. Can you imagine being 17 and every time you wanted to take a piss he was standing right beside me?

“It made me feel really anxious,” he reveals in the podcast.

Watson recounts stories of being rung up by someone so “obsessed” with Johns that they were threatening to put a gun to their head and kill themselves if he didn’t get Johns on the phone.

Another girl, crying hysterically, said she was pregnant with Johns’ baby.

“Another example, creepy as hell, a number of the more obsessive crazies who would come after Daniel were people his mother’s age, who sadly had terminations around the time Daniel had been born and they were obsessed with this idea that Daniel was the son they had never had.

“There were many of these people.”

Another fan threatened to shoot themselves if Watson didn’t put the singer on the phone, despite Watson assuring the fan Johns wasn’t there.

“The person came in over the top of me and said: ‘Put him on in the next 10 seconds or I am going to shoot myself’,” Watson said.

“(I said) ‘There are people you can call for help’. And then a bang. I still don’t know if that person killed themselves or they were just trying to talk to Daniel.”

The price of fame

It has been more than a decade since a Silverchair album, and Johns says the band will never get back together, with all the memorabilia and awards at his mother’s home.

“It’s not that I am not proud of it, but for some reason I don’t want it around,” he said.

“I wouldn’t even get Silverchair back together for a million dollars with a gun to my head.”

As Mac points out: “All that fame sh-t was a real eye-opener and really damaging.”

So damaging that Johns’ mental health suffered for years before finding himself content, telling Ten’s The Project on October 20: “It took me years and years and years of really heavy, heavy therapy,” he said.

“I gave up millions and millions and possibilities endlessly just to be internally happy,” he added, as the young singer battled anorexia, a debilitating form of arthritis and eventually, his marriage to Imbruglia.

The couple split after four years, and after reaching out to each other after 10 years, she says in the podcast (and more in later episodes): “Who is Daniel Johns? The first thing that springs to mind is ‘musical genius’. Also ‘Peter Pan’ maybe.”

Standing by a cliff overlooking the Pacific Ocean near Newcastle, Johns finishes the first podcast episode: “There’s a reason people like Prince or Kanye West end up buying compounds and just living by themselves, because it’s just too much.

“It’s too much to be in normal society,” Johns said.

“I’m not putting myself on that level … but that’s why I just disappear. It’s just too much.

“Once you get a taste of it and you don’t like it, you don’t eat it again. I tasted it and I didn’t like it.”

Why do the podcast, then, which puts him back in the spotlight?

“I’m happy to do it because I think it’s a good vessel to release art. Above all things, I just want to make art, and I would really love for people to hear it.

“And the only way to get people to hear my art is through vessels like this because I don’t want to perform on stage.”