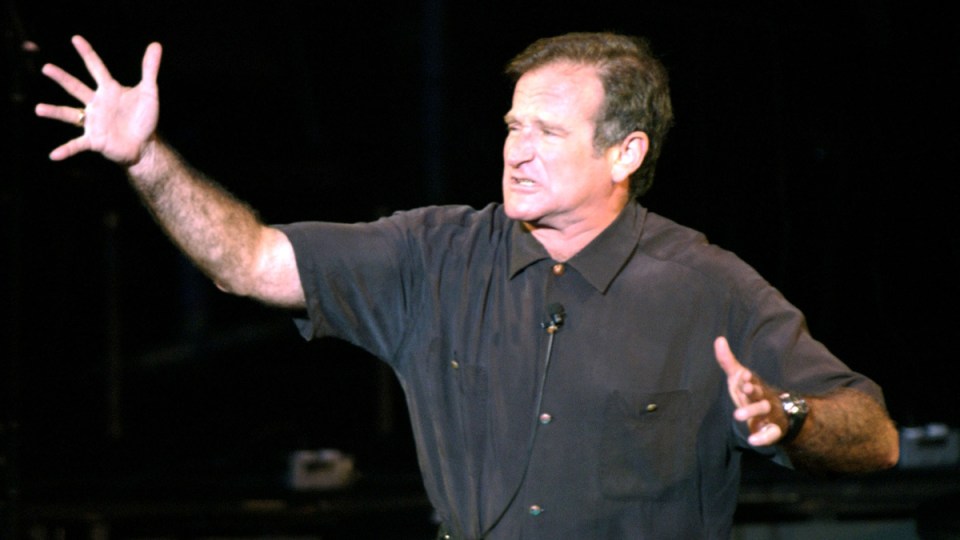 A NYT 2018 bestseller Robin says Williams was one of America's most beloved and misunderstood entertainers. Photo: Getty

The world of movies and television still misses the brilliance of the late actor and comedic genius Robin Williams, who died suddenly seven years ago at age 63.

He had squeezed a hugely diverse catalogue of work into nearly four decades, from iconic TV roles in Mork & Mindy, playing a radio DJ in Good Morning, Vietnam, a teacher in Dead Poets Society to the much-loved cross-dressing nanny in Mrs. Doubtfire, which still delights and amuses audiences of all ages 28 years later.

Director/producer Chris Columbus told Total Film magazine over the weekend that Williams was interested in playing the Defence against the Dark Arts professor in 2004’s Harry Potter and the Prisoner of Azkaban (the third movie).

However, there was a strict rule around casting Americans, so ultimately English actor David Thewlis was cast in the role for authenticity.

“I had a conversation with Robin Williams, who wanted to play Lupin,” Columbus said.

“It was very difficult for me to say ‘it’s all British … there’s nothing I can do’.”

What could have been …

In 2016, the UK’s HuffPost revealed the British rule was implemented when Williams was also turned down for the role of half-giant, half-man Rubeus Hagrid.

“Robin [Williams] had called [Chris Columbus] because he really wanted to be in the movie, but it was a British-only edict, and once he said no to Robin, he wasn’t going to say yes to anybody else, that’s for sure,” said the casting director. “It couldn’t be,” reported Huffpost.

That role was snapped up by Scottish actor Robbie Coltrane.

Is there another biopic on the horizon?

On October 13, a five-minute test video was released by actor and impersonator Jamie Costa (who uploaded a short video of impressions after Williams’ death in 2014), sending fans into a campaign frenzy about casting him immediately for a Robin Williams biopic.

People magazine said fans were “blown away” by the footage of a Mork & Mindy scene with Sarah Murphree (Pam Dawber), calling for a “Robin Williams biopic”.

“Jamie Costa encapsulates the essence of Robin Williams so perfectly that this ‘fan footage’ for a proposed biopic is a clear sign this truly needs to happen,” one fan wrote.

Another said: “Just watched #JamieCosta doing an impression of the beloved Robin Williams, and it crushed me. It was SO amazing. Beyond words amazing. I’d love to see the biopic of Robin with this man as the lead.

And that’s the sticking point.

Like many biopics before, with some stunning standouts including Rami Malek playing Freddie Mercury in Bohemian Rhapsody and Taron Egerton playing Elton John in Rocketman, there would be concerns about who could essentially nail the unique characteristics that were beholden to Williams alone.

His daughter Zelda Williams, 32, took to Twitter on October 15 to ask people to stop sending her the clip, saying it made her feel “uncomfy”.

“The clip made me uncomfy so I was asking kindly for folks to stop sending it to me over and over. Your love for Dad doesn’t mean I have to tolerate being bombarded in silence, and being projected upon can be pretty exhausting some days,” she wrote.

And even though it’s still an idea, with no official confirmation any movie is in the works, the video was then taken down by YouTube, citing copyright issues before re-emerging from others on social media.

According to Indiewire, “Costa’s impersonation is almost unnervingly precise. Just as Williams himself could impersonate any number of public figures and voices, Costa seems amazingly in control of his instrument”.

“His vocal inflection and intonation are seemingly perfect, and he even captured Williams’ unique way of descending quickly into a low, hushed whisper and then back up to a frenzied full volume.

“The dramatic scene is caught mostly in close-up. He also seems to have nailed the physicality, such as the way he rubs his hands together, grips his jaw, or fitfully shoots his arms up in the air.

Williams began his career as a stand-up comedian in San Francisco and Los Angeles in the 1970s before securing the iconic role of an extraterrestrial from the planet Ork in Mork & Mindy.

Throughout his career, which included the Night at the Museum trilogy, Jumanji and The Fisher King, Williams was nominated for four Academy Awards, winning Best Supporting Actor for Good Will Hunting.

The entertainment world was devastated when it was revealed he had taken his own life (attributed to his struggle with Lewy body disease) on August 11,  2014, at his home in California.

And left wondering had he taken on the magical world of Harry Potter.

He once told the New York Post in 2001, “there were a couple of parts” he would have wanted to play, “but there was a ban on American actors”.

He didn’t rule out a role in one of the sequels, however: “Maybe one day. Say if [Harry] goes to Yale and becomes president.”

Peter Dutton touted as next Liberal leader as he claimed victory in Dickson
‘The urgency of the situation’: WHO steps in as monkeypox cases erupt around the world
Volodymyr Zelensky: How war will end as Ukraine ‘breaks backbone’ of Russian army
Jim Chalmers decries Coalition waste as Labor hits the hustings amid downpours in Queensland
Anthony Albanese, Scott Morrison cast their votes in Sydney
Australian aces at French Open out to show there’s life after Ash Barty
The world’s highest-grossing film that you’ve probably never heard of
Today's Stories

Why late comedic genius Robin Williams is back in the spotlight