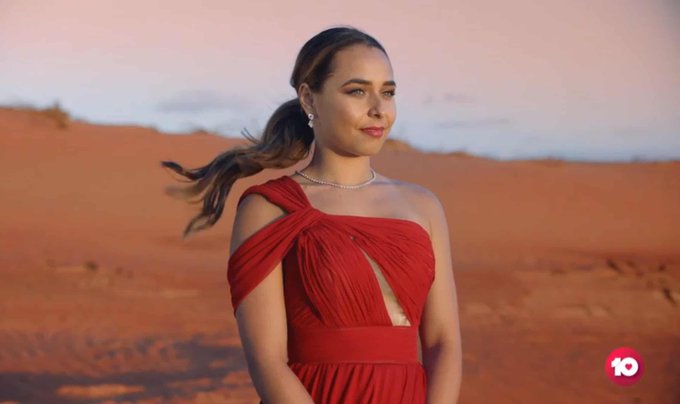 If you thought previous incarnations of Ten’s popular reality TV dating show Bachelorette Australia were full of tears, drama and disappointment, by all accounts the latest tease for this year’s show promises all that, and more.

This year’s star is Brooke Blurton, 26, a bisexual Noongar-Yamatji woman from Western Australia who is a mental health advocate and Indigenous youth social worker.

She’s making history as the first Indigenous Australian to appear on a television show where – for the first time – both men and women [16 all up] will compete for the red rose.

Kicking off this year’s show, Bachelorette host since 2015 [and Bachelor host since 2013] Osher Gunsberg asks of the cohort hoping to win Blurton’s heart: “Ladies and gentlemen, are you ready to make history?”

Speaking to The New Daily, Gunsberg says “this is really going to blow the doors off Australia when they watch her love story happen”.

However, there’s always a totally unexpected shock twist on a reality TV dating show, and this year’s no different.

Close friends on the Honey Badger’s season of The Bachelor Australia (2018), Blurton and (also) openly bisexual reality TV hopeful Jamie-Lee Dayz, now 30, will be reunited on screen after three years, and well, it’s going to get complicated.

So says the latest Ten trailer, where they recap how their friendship went one step further, preferring each other’s company to that of former NRL player Nick Cummins.

Posting a cryptic message to her Instagram followers on October 8, Blurton, from Quairading in WA, said she had “been a bit AWOL on the old content”.

“I’m holding out for the mo, only because fire content is only around the corner and I don’t think you guys are ready for it,” she teased.

With more than 239,000 Instagram followers, Blurton, 26, is hoping to strike it third time lucky on the reality TV platform, after failing to find love on the Bachelor and Bachelor in Paradise in seasons past.

In a two-minute trailer released on October 5, we get a taste of what’s about to unfold as Blurton drops the unimaginable bombshell – actually falling in love on a reality TV show.

“This is how I want to fall in love. This is something that I wouldn’t compromise on and I am exactly where I need to be,” she tells the camera.

We see Brooke and her swag of styled and polished contestants holding champagne glasses in various one-on-one scenes with her: She’s in a steamy hot tub, she’s kissing someone under a rug in fake snow, and she’s even dangling off the edge of a cliff having a picnic with someone else.

The love curse – where our recent couples are now

In the sixth instalment of Bachelorette Australia in 2020, sisters Elly and Becky Miles chose Frazer Neate and Peter Mann respectively.

“We came into this experience wanting a fairytale ending for the two of us, and while I am thrilled that Elly found her person in Frazer, unfortunately, things didn’t work out with Pete and me,” she wrote via the official Bachelorette Australia account.

However, six weeks later Elly Miles also took the social media route in December to announce that she and Neate were “no longer together”, having grown apart after the show.

““Having your personal life/relationship on display for the nation/world is something you couldn’t possibly understand unless you go through it yourself … and yes, I do know that I put myself in that position but I’m still allowed to say it’s hard & that you truly can’t appreciate the weight of it until you experience it,” she wrote on Instagram.

Angie Kent won the hearts of the nation in 2019 when she chose Carlin Sterritt.

When they unfollowed each other on the socials months later, fans knew something was wrong.

By July, the relationship was over, announced via their Instagrams.

But it’s not all doom and gloom. Let’s not put the love curse on Blurton.

“Through this … show we’re able to hopefully show to Australians that, through no fault of their own, we have never really experienced or seen somebody from that community looking for love, and why love is important,” Gunsberg said.

And it’s important to Blurton. Her heart is full. She’s ready to find true love. And now she makes us want to know who she chooses as her forever companion.

With tears in her eyes, she said: “The third time … has restored my faith in actually loving something so unconditionally and knowing they love you back.

Just with whom, we’ll have to wait and see.

The Bachelorette Australia starts on Wednesday, October 20 on 10 and 10 play on demand

‘What a hit’: Albanese on attack after dire wages data
Inquiry into mother’s convictions over deaths of four children
Viagogo loses appeal over $7m penalty
Sydney home sprayed with bullets in gang violence
‘Admit what the hell is going on’: Biden wants US to face White Supremacy problem
Device detonated, man arrested in Brisbane sieges
The Beatles unveil unseen footage in new Get Back trailer
Today's Stories

A Bachelorette first – Indigenous and bisexual – but will she suffer the same love curse?