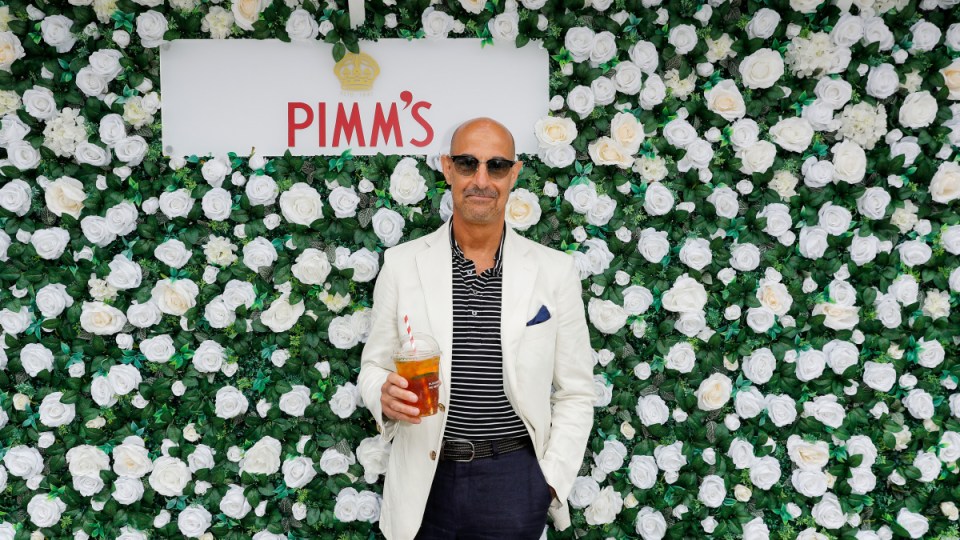 London-based Tucci has also become a cookbook author and host of a CNN travel and cooking show. Photo: Getty

Once again, this time in just a 12-second Instagram post whipping up a late-night pasta dish, Emmy-winning actor, cooking show host and author Stanley Tucci has triggered an outpouring of love and laughter.

Pretending to be a little bit hangry – “God, I’m f–king hungry” he mutters under his breath – he then breaks out in his trademark smirky smile, and all is well with the world.

“11pm marinara and leftover pasta. As promised,” the obsessed foodie wrote on Instagram on Monday.

It’s not the first time Tucci, 60, who lives in Barnes, London with his wife Felicity Blunt and their two young children and can’t go 24 hours without a decent workout, has, well, just been himself on screen rather than performing.

In March last year at the beginning of the lockdown in the UK, he posted a 71-second clip on how to make the perfect cocktail, a Negroni.

Suffice to say the clip generated millions of views, and Tucci, after 40 years on our movie and television screens, suddenly and unexpectedly became “one of lockdown’s standout sex symbols”.

In an interview with Virgin Atlantic’s September issue of its in-flight magazine, Vera, he said he actually “got a lot done”, admitting that cooking, working and being with his family (his first wife Kate died in 2009) “was a vision of the way life should be”.

“I don’t know what happened,” he said.

“It was so weird. I made this video and my wife told me to put it up on Instagram. All of a sudden it was everywhere and everyone was saying I was a ‘sexy bartender’. I was like, ‘Boy, people are desperate’. They were at home and the liquor stores weren’t shut.

“I’ve been around a long time, but people have never really seen me at home, so I think they saw a different side,” he offers.

“I think they liked seeing someone trying to have fun during lockdown.”

Searching for Italy and recovering from cancer

Three years ago, Tucci was diagnosed with throat cancer, revealing he had a tumour at the base of his tongue.

“It was too big to operate, so they had to do high-dose radiation and chemo,” he tells Vera.

“I’d vowed I’d never do anything like that, because my first wife died of cancer, and to watch her go through those treatments for years was horrible.

“The kids were great, but it was hard for them. I had a feeding tube for six months. I could barely make it to the twins’ high school graduation.”

In between making movies including Supernova (released in April) with Colin Firth, he’s also received wide acclaim for a food and travel show on CNN, and has just released his memoir.

In Taste: My Life Through Food (Simon and Schuster, October 5), described as a “reflection on the intersection of food and life”, Tucci writes about growing up in New York, his obsession with food and family, to falling in love over dinner.

Towards the end of the book (which rarely touches on his acting career), he writes about his cancer battle, chronicling how during the filming of his 2019 breakout CNN series Stanley Tucci: Searching for Italy, he struggled with eating, drinking and swallowing.

In an interview with The New York Times on October 2, Tucci said “it was hard because I could taste everything, but I couldn’t necessarily swallow”, revealing he had to chew a traditional Tuscan dish, Steak Fiorentina, for 10 minutes “to get it down my throat”.

“There was no way I wasn’t going to make it [the show, which has been renewed for a second series],” he said.

“I’ve wanted to tell for a long time the story of Italy and the disparate cuisine in every region.”

Tucci says he’s now in remission and his taste has returned – it’s even “heightened”.

“I can smell things that … I never would have been able to smell before,” he said.

“And I can taste things much more quickly, like I’m much more hyperaware of what things taste like now.”

Speaking of tasting, he tells The Times he hopes that when he’s feeling better, “and when it won’t feel like work”, he dreams of eating steak, pad thai, dal and sushi.

For now, he’s heading back to his Barnes home to cook up a late-night dish.

“Just some pasta, with fresh tomato and shrimp, a little shrimp stock, some basil, and then we can throw a salad on the side,” says Tucci, who has written two cookbooks.

And before long, the stylish actor who has captured “authenticity on the internet” was on Instagram cooking up just that.

‘You cook in a suit?’: Italian-American actor Stanley Tucci is the accidental Instagram star