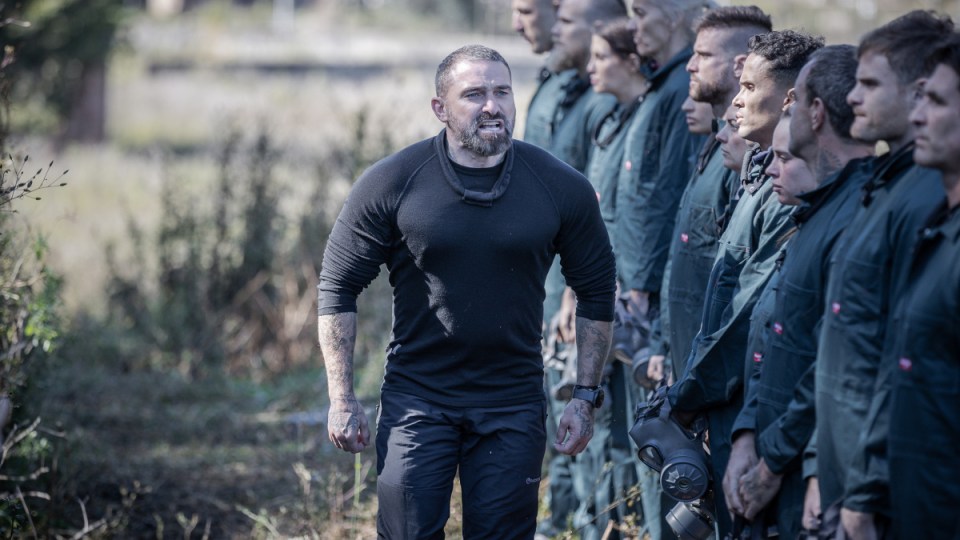 And the boys are back for another season of SAS Australia in 2022. Photo: Seven

The recipe for reality TV ratings success goes something like this: Find a group of wannabe celebrities, bring in a team of stylists and make-up artists, match them with producers and drama-filled storylines and scripts, and then deliver audiences a glossy end product.

Unlike our contestants on The Block, The Voice or MasterChef who just have to turn up each day after a decent night’s sleep and a hot meal, this show goes one step further.

It’s brutal. Raw and emotional. Completely over the top.

Under the direction of Chief Instructor Ant Middleton and the DS (Directing Staff) Mark “Billy” Billingham, Jason “Foxy” Fox and Ollie Ollerton, 18 celebrities take on what’s been described as the most gruelling selection course ever seen in the UK or Australia.

Right from the start, these four SAS soldiers – who say exactly what they think – push everyone to breaking point and it appears none of what comes out of the mouths of the recruits is from a script or storyline.

Seven’s director of programming Angus Ross says “SAS Australia was the most talked about show on television last year and for good reason. It puts the real into reality TV.”

In the first episode alone, even before entering a secret compound, the recruits – who include track-and-field-Olympian-turned-doctor Jana Pittman, NRL player Sam Burgess and Bra Boy Koby Abberton – were gassed.

“The opening task really sets the scene for the rest of the course. It is extremely brutal, what some people might call borderline torture,” says Foxy.

Middleton probably sums it up best: “Everyone thinks they’re hardcore until they get f—ing gassed.”

These Special Forces operators are here to strip the celebs of their egos, push them to do things no normal reality TV contestant should have to do, and punish them with sleep deprivation, interrogation and psychological testing.

They’ve got to jump backwards off a cliff, rescue a hostage from a terror situation by shooting from a machine gun wearing night-vision goggles, drive across an exploding bridge, drag a 150-kilogram log across a five-kilometre track. It gets worse … extricate themselves from a submerged car so they don’t drown.

All for what? To make them a better person, Middleton says.

Reality TV casting director and producer Lucky Price tells The New Daily “the environment the SAS cast members find themselves in is so consuming there is no time to mediate their response or consider how they want to frame their reaction in a moment”.

“That kind of framework gives you raw, instant and real reactions, which is such compelling TV,” he said.

Have the DS created a kind of Stockholm Syndrome?

Despite the DS putting these celebrities through brutal scenarios every day – where they’re yelled at to the point of having to look away from the screen – all four generate respect and a willingness for contestants to share intimate, emotional aspects of their lives when they’re brought in one by one into the Mirror Room.

The soldiers pick exactly who is failing or about to give up, or who becomes withdrawn with nothing left in the tank.

Pitted in teams, they had to drag three 50-kilogram tyres along a six-kilometre bush track.

Kenny had a meltdown and just couldn’t go any further.

“I felt like as soon as I was becoming a liability I probably didn’t deserve to be there,” Jett told the DS. “In my head I’d failed.”

Or athlete Jessica Peris. Strapped into a car and submerged under water for 40 seconds, it brought up traumatic memories for her.

Peris revealed it had been tough growing up in her mother’s shadow and that her mental health suffered after testing positive to a banned substance, forcing her withdrawal from the 2018 Commonwealth Games trials.

Actor Isabelle Cornish disclosed to them she had suffered from an eating disorder and was recently diagnosed with ADHD.

After failing a task, his integrity was questioned. He was already fragile, revealing his marriage had broken down and his three-year-old son started calling his stepfather “Dad” and Dan “Daddy”.

Foxy pressed him on his inability to own up to his mistakes, saying: “What I saw and heard was you trying to bullsh-t your way out of it because you were embarrassed that you were the only one to reverse out.”

“The big key is integrity. You had your f—ing chance, I told you you got it wrong. Just take it on the chin. You stand taller by telling us, yeah I f—ed up.”

“I think this show demands that people give their 100 per cent … it’s the only way through these ‘challenges’ and also the only way they will make the most out of the experience,” he said.

“Often people on these shows find themselves sharing things they never thought they would. Perhaps it’s a bit of magic, but maybe it is just someone taking the time to demand honesty from you.

“Perhaps that is liberating for these participants.”

Asked whether the show’s edginess is down to the fact the stars aren’t groomed or left alone, or grabbed in the middle of the night and masked up, Price is quick to point out the producers still have their hand in this mix.

“All of those choices are styling, producing, and techniques all on other shows. [Contestants] on The Block are not groomed, on Big Brother not given time alone, they’re grabbed in the middle of the night (Survivor) and masked up (Masked Singer), forced to stand outside in the cold as punishment for someone else’s mistake (anyone seen Housewives lately?).

“A great remix of tried and true techniques and devices,” he said.

However, he admits these four soldiers are doing something different.

“I think maybe these guys are just doing what every reality TV producer wishes they could do.”
SAS Australia screens from Monday to Wednesday at 7.30pm on Channel 7 and 7plus