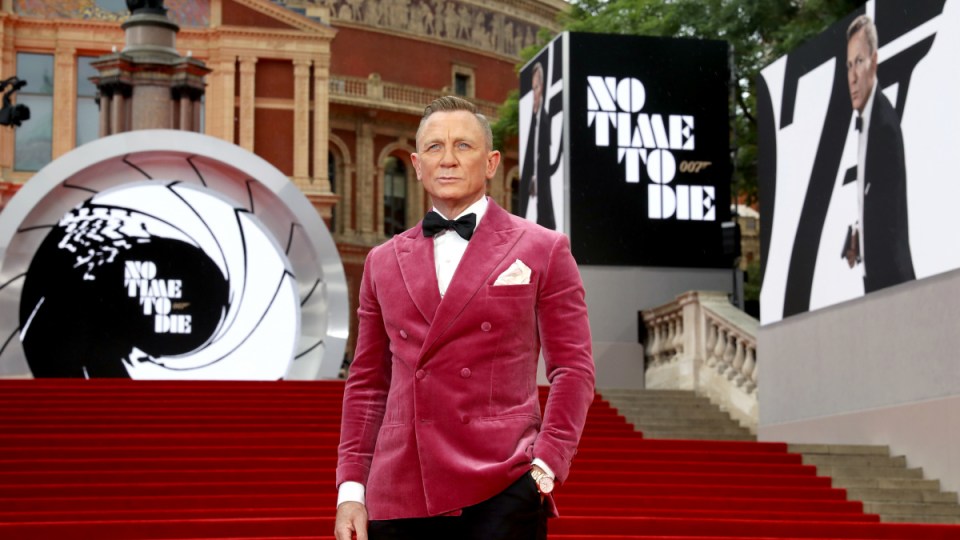 September – James Bond film No Time To Die finally premieres in September after 18 months of delays due to the pandemic. The film saw Daniel Craig reprise his role as agent 007 for a fifth and final time. Photo: Getty

In an eye-catching pink velvet dinner jacket, Daniel Craig stood on the red carpet at the Royal Albert Hall in London with a steely gaze, ready to hand over his famed secret agent James Bond to the next action man.

He knew it was coming. He was ready to leave the multibillion-dollar franchise after five thrilling movies on a high note, confident his “flawed” Bond character would survive into the future.

After an incredible record of 25 instalments, with British royalty and a cast of celebrities at the world premiere after an 18-month delay due to COVID-19 and creative changes, initial reviews said No Time To Die was “startling”.

“It’s Daniel Craig’s most grounded and – dare I say it? – most intimate take on #JamesBond with a powerful, unexpected & very emotional payoff,” film critic Scott Mantz said on Twitter.

“Def worth the wait!”

Rotten Tomatoes’ Tessa Smith agreed: “No Time To Die is everything I wanted & more! Action packed from the start!”

But it was Daniel Craig, who made his debut as 007 in Casino Royale (2006), who really nailed it, telling the PA news agency “the making of it was just so important” when it came to reflecting on what the part has meant to him, his career and its place on the big screen.

“Bond movies are to be seen in the cinema and this one especially. It’s spectacular.

“I’m just so grateful for the fact that I got a chance to go and make one last one and for it to be this one and to finish telling the story.

“This has been a massive part of my life. I’m never not going to think about this. It’s been too big a thing in my life,” the 53-year-old said.

The film’s director Cary Joji Fukunaga told PA he was delighted audiences would be able to enjoy the movie on the big screen.

“I was so happy people are getting to see it in a cinema,” the American said.

“We made this, especially shooting on IMAX [Germany is opening the biggest IMAX in the world for the film] and all the work we did on sound … all the sequences were meant to be seen larger than life on the big screen and shared with audiences for that contagious feeling of emotions when you’re in a cinema.”

Ben Whishaw, who plays Q, told Variety he’s relieved the studio insisted the film be exclusively released in theatres: “I’m happy for any film that gets a release at the cinema, but I think particularly something like this,” he says.

“It’s not meant to be watched at home. It’s just something about the scale, the majesty, the whole experience of it.”

By all accounts, No Time To Die promises a massive box office recovery post-COVID-19 at cinemas around the world, with more than 50 markets gearing up for big ticket sales at opening weekends.

Predictions are the session will rake in $90 million – Fast and Furious 9 was $69 million – and when the Middle East, the US, China and Australia (among others) come online throughout October and early November, the franchise is expected to have a “big win”, coming in on budget, and more.

One UK cinema chain estimates September attendance tracking will be 10 per cent “above the same month in 2019, and puts Bond in line for the biggest opening at its cinemas since summer of that pre-pandemic year”, according to Deadline.

You bet he is.

From the first Bond film in 1962, Dr. No, starring Sean Connery, to 2006 there were 20 self-contained storylines. All big cinema experiences.

But the rise of Marvel Studios and its swag of superhero films beginning with Ironman (2004) compelled writers to remaster the Bond story to keep its relevance on the cinematic landscape, rather than being a relic.

They had to give the secret agent a past, and a present, with all five of Daniel Craig’s Bonds linked from one instalment to the next.

“Bond was able to survive any number of tectonic shifts in the cultural landscape in large part because of the series’ timeless formula: Hit up exotic locations, kill some henchman, have sex with numerous women, immediately forget about them when they’re murdered a few scenes later, and defeat an evil mastermind,” wrote Rolling Stone magazine.

“Only two years passed between the releases of Casino Royale (2006) and Quantum of Solace (2008), but that was long enough for Sony to realise that 007 was already at risk of becoming a relic.

“To rescue the world’s most lucrative spy from the clutches of obsolescence, the studio would have to resort to drastic measures and shake the very foundations of a franchise that was older than most of the people working on it.’’

They gave Bond a story of romance, of weaving in characters from previous incarnations and bringing in women of colour into key 00 roles.

In 2019, at the beginning of shooting No Time To Die, Craig told the BBC that the Bond character, while flawed, has had to move with the times.

“Bond has always adapted for the times, moved. You are dealing with a character who is flawed, has issues, and that is still something that is still worth exploring,” he said.

So it’s all worked out, and everyone lives happily ever after.

As Craig pointed out on the red carpet on September 28: “We tied up lots of loose ends.”

“We’ve tried to tell one story with all my Bond movies. It’s like they’re all connected in some way and this one just sort of capped it off.”

Adds Fukunaga: “The most daunting part was just coming up with a good story. I think of it as a last chapter of this one book where we first met Daniel in Casino Royale and it’s all part of the same story.”

Asked how he felt about saying goodbye to the role, he said: “I’m good. I’m really good about it.”

As for who would be his successor, he simply quipped: “Not my problem.”

Keen to head inside Royal Albert Hall out of a soggy, wet London night, Craig did have one piece of advice for the next Bond: “Just make it your own, be brilliant.