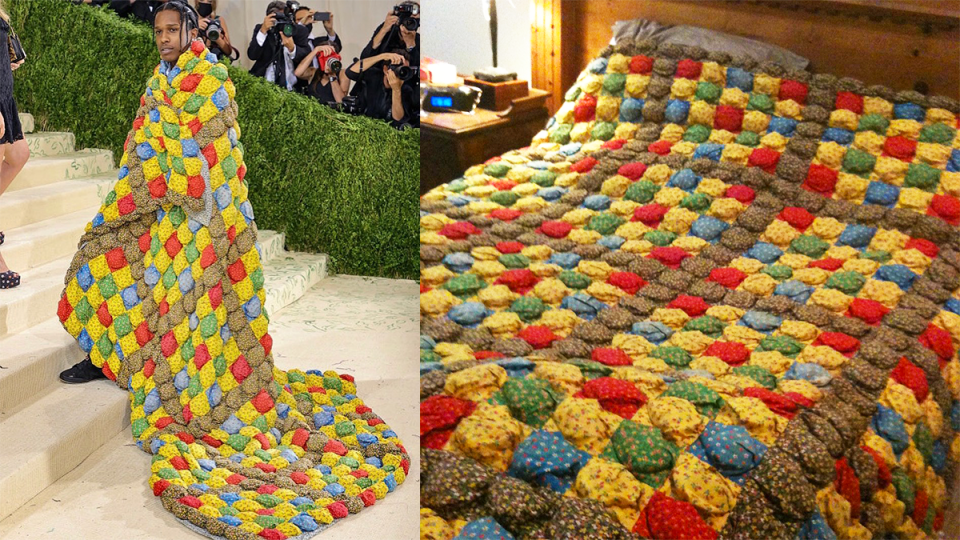 American rapper A$AP Rocky's Met Gala outfit has been found to be made of a quilt donated to a thrift shop in California. Photos: Instagram

The 2021 Met Gala may have been two weeks ago, but the origins of outfits that adorned the red carpet continue to make waves on social media.

The Met Gala is one of the biggest occasions on the fashion calendar, with the invitation-only event attracting looks that range to up to millions of dollars in value and tens of hours in hand sewing and crafting.

Beyonce’s 2016 Met Gala custom-made dress is among the event’s most expensive in history, with each sewn-on pearl rumoured to have cost up to $8000 alone.

However, some of the fashions from the 2021 event may be more accessible than thought at first glance.

The 2021 theme ‘In America: A Lexicon of Fashion’ inspired a range of wacky looks, including rapper A$AP Rocky’s quilt cape.

A$AP arrived on the red carpet with pop star girlfriend and Met Gala regular Rihanna on his arm.

His colourful quilted look was hard to miss on fashion’s biggest night of the year.

In an interview with Vogue, Linnetz revealed he bought the multicoloured quilt from a thrift shop in California, which caught the eye of one eagle-eyed reader.

A woman named Sarah came forward on Instagram to share that her great-grandmother’s quilt had been donated to a thrift store in Southern California, and she believed A$AP’s outfit could possibly be constructed from her exact quilt.

Sarah shared a post of her great-grandmother’s bed to Instagram, accompanied by a shot of A$AP Rocky and Rihanna on the red carpet.

“When I saw the #metgala photo I realised instantly that it had to be the same quilt,” she wrote.

“I demanded that my mom go look for the photos of it on our old bed. Looks like great-grandma Mary went to the #metgala.”

Looks like it’s true when they say one man’s trash is another man’s treasure.

Grimes’ multiple accessories including a prop sword, crafted from a melted-down gun, and a shiny metallic face mask accentuated her fantastical war-princess look.

However, it was her dreamy ear accessories and luminescent book that caught the eye of viewers.

Grimes revealed in a Vogue YouTube video that her earrings were found on shopping site Etsy.

The detailed winged cuff worn by Grimes is available on the site for $59.04.

Fans of the singer also found her book accessory was available to buy on Amazon. For diehard fans of the singer wanting the complete look, the designer of Grimes’ gown Iris Van Herpen shared on social media that the creation would be auctioned at Sotheby’s in November.

The designer said the proceeds will be donated to Amazon Conservation and the Rainforest Trust.

The origin of these Met Gala fashions will shock you