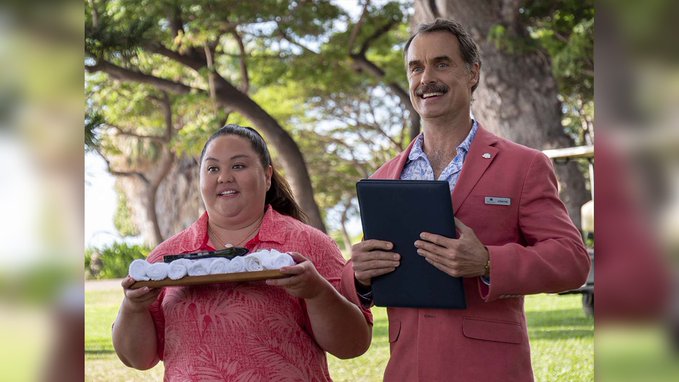 Murray Bartlett's first acting role was in a 1987 episode of The Flying Doctors called ‘The Unluckiest Boy in Town’. Not now. Photo: Twitter

You would be forgiven if you haven’t heard of US-based Sydney soap star Murray Bartlett, who has taken the streaming world by surprise with his breakout role in HBO’s most recent offering.

Well, you do now!

After Bartlett, 50, landed the role of the delightfully mischievous (and slightly unhinged) front office manager Armond in Foxtel’s The White Lotus, viewers are screaming out for more Murray!

From the moment you see Bartlett wearing his dusty-pink suit with clipboard in hand, welcoming guests to his resort (filmed over three months late last year at The Four Seasons in Maui) with hot towels and an orchid lei, you get the feeling Bartlett has got this performance nailed.

Starring alongside Connie Britton, Jennifer Coolidge and Steve Zahn, the six-part series follows a week-long holiday for a bunch of miserable, flawed rich guests who check in to a warm, breezy five-star Hawaiian resort.

CNN’s Halo Gorani wrote: “The White Lotus is just brilliant. Dark and unsettling but hilarious at the same time. And Murray Bartlett is one of my new favourite actors”.

“What an absolute treat, one of the funniest shows I’ve ever seen, absolutely wonderful. Murray Bartlett’s Armond is one of the great telly characters ever brought to life!,” said the Sunday Mail’s Brian McIver.

Back home in Australia, almost overnight everyone wants to claim him, given he started out on Home and Away and Neighbours before moving to the US to break into the big time.

‘The Aussie Star Of Your New Guilty Pleasure’

In a July interview with its Insider reviews just before the series aired, Bartlett said his character (written and directed by School of Rock’s Mike White), is very good at being in control of his guests, except one.

Armond is playfully wicked as he attempts to help organise romantic dinners, find lost bags on the beach, sort scuba-diving, or even set up a boat to help Coolidge’s sad character spread her mother’s ashes out at sea.

Nothing quite works out as it should, and as Variety says: “[It’s] an intoxicating rabbit hole”.

There’s one guest, the handsome, entitled Shane Patton (Jake Lacy), who does his head in right from the get-go.

Arriving with his fiance, Patton becomes totally obsessed with feeling like he’s been given the wrong room, instead of the Pineapple Suite. He forgets about being romantic, instead hassles and chases Armond from corridor to dining room demanding answers on his upgrade.

Armond plays his full deck of passive-aggressive cards brilliantly, right up until the end of the series (we’ll get to the last 10 minutes later).

“These characters lose control of themselves and begin spiralling into their ugly sides.

“As the show goes on, you realise there’s a lot of stuff going on with all the characters – and my character is no exception.

“Armond has his own really intense issues that, when things start to unravel in the resort, all those things come up like a volcano. You really see the extent of what’s going on underneath [the surface] for these characters and it’s really quite exciting and also quite unsettling,” Bartlett says.

After being cast in single episodes on local television productions and short films, Bartlett moved to the US in 2000 where he landed his first acting job in an episode of Sex and the City.

Speaking to GQ Magazine in August, he said he was “just happy to be on the show”.

With almost no out gay actors, and very few gay roles back then, GQ asked whether he thought of himself as a pioneer.

“Perhaps at the time it was pioneering because [being out] was still somewhat unusual. But I didn’t feel like I really had an alternative; I just never felt I could ever be anything but myself,” he said.

Fast forward to The White Lotus, where, he says, the set and the crew made him feel right at home: “The set felt like the kind of place where anything was possible, where we were totally free”.

There’s sex scenes, drug scenes and a shocking scene where Armond sneaks into the Pineapple Suite seeking what many would describe as the ultimate revenge against his nemesis Patton.

Let’s just say the ill-fated Armond won’t be there, nor his fellow cast, when the series returns for a second season set in Europe.

Bartlett says the attention he’s received is “definitely a surprise”, telling The Guardian on September 9 he wasn’t sure what his next career move would be after he and his partner recently left New York for Provincetown, Massachusetts amid COVID uncertainty.

He feels like he has “finally had his big break”.

“It’s not like I expected it to happen, for sure. But now that it has happened, it feels like it’s really good timing.”

Bartlett is currently involved in HBO’s next project – the television series adaptation of The Last of Us.

Who is Murray Bartlett? Aussie soap star owns the screen in The White Lotus