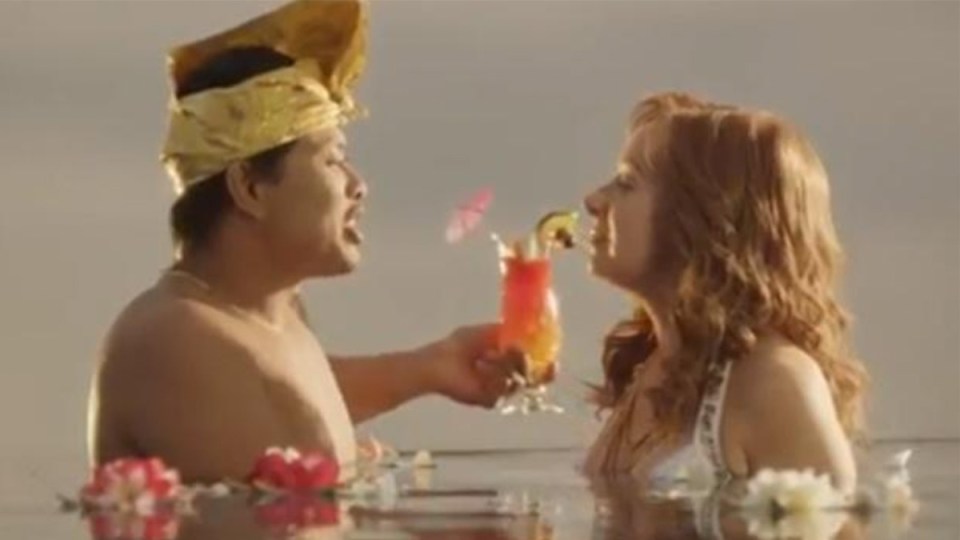 The couple captured hearts in a slate of commercials for AAMI insurance. Photo: Twitter

Who could forget one of Australia’s most beloved couples, Rhonda and Ketut?

The classic tale of love and advertising first captured hearts in a campaign for AAMI insurance back in 2011.

The terrible sunglass tans of this Balinese love affair, and the words “kiss me Ketut” have lingered in the nation’s collective memory for a decade since.

If you have ever found yourself wondering if that romance lasted, the insurance company has revealed the couple have been on a break.

Don’t panic, not from one another, just from TV.

It seems they took a hiatus to raise their three kids out of the public eye.

But like a sunrise after every dark night, the lovebirds are making a resplendent comeback.

The pair will grace television screens around the country from Saturday September 18 with a simple message for Australia.

In a first glimpse of the new advert, Ketut (Kadek Mahardika) appears with his sleeve rolled up to show off a bandaid, suggesting he has just been jabbed.

“Eyes on the future Australia,” he says.

CEO Lisa Harrison said AAMI was hopping aboard the rollout train to help Australia get back on its feet, as the COVID pandemic continues to impact the Insurance company’s customers.

“We strongly support the need for a rapid, efficient, safe and effective vaccination strategy for Australia,” Ms Harrison said in a statement.

“It’s also why we’ve brought back Rhonda and Ketut, to launch our own call to arms campaign proactively encouraging Australians to take action, as getting vaccinated is our ticket to a more ‘normal’ existence and getting back to doing what we love.”

The campaign from AAMI will join a number of others targeting vaccine hesitant Aussies.

It follows a notable industry-led push in September to get Aussies back into live music venues, festivals and comedy galas.

Spearheaded by The Gruen Transfer panellist Russel Howcroft, the TV and social media campaign slugged #VaxtheNation was supported by more than 220 big names in the Australian entertainment business.

Some of those names also appeared in a truly memorable collaborative effort from Victoria’s Arts Community and the Melbourne Symphony Orchestra in July.

Visually stunning and accompanied by the emotive musical stylings of the MSO – artists, comedians, dancers and actors called on Australians to give the “performance of a lifetime” by getting inoculated.

Kiss me Ketut? Beloved couple return with a message for Aussies