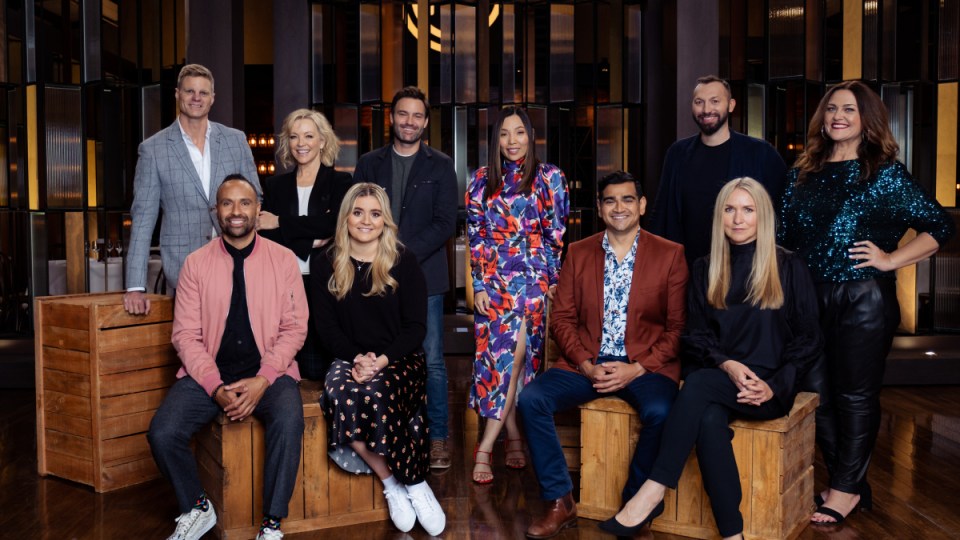 Judges Melissa Leong, Andy Allen and Jock Zonfrillo will decide which celebrities have the palate and skill to win. Photo: Channel 10

It was hot, then really cold, and now hot as Celebrity MasterChef once again promises to tick all the boxes with a bunch of amateur cooks ready to do dreaded pressure tests, pull our heartstrings with emotional exits, and leave us reeling with delivering near-impossible dishes.

More about that later.

To add to the spice of Channel 10’s huge success with the current series of MasterChef, the network has announced its list of 10 “famous faces” to pull on the aprons and enter the MasterChef kitchen after a massive 12 years in the deep freeze.

By comparison, the MasterChef masterpiece has been running for 13 seasons straight (also starting in 2009).

The only change has been swapping out the old judges for Melissa Leong, Andy Allen and Jock Zonfrillo.

He scored the most points for a chocolate delice and a roast chicken in salt crust and hay, saying at the time after making it through the first round, his killer competitive instinct kicked in and he wanted to go all the way.

“There were times when I was close to throwing in the towel, but if there’s one thing I know as a sportsman, it’s that it’s never over until the very end,” he told Gourmet Traveller in 2010. Good tip for the current stock of celebrities.

While not giving away any tips on the format of Series 2 of the celebrity version, the first time round we saw heats and semi-finals based around 10 episodes.

Executive producer Mark Fennessy said back in February 2010: “I doubt whether Celebrity MasterChef will come back”. That was then. This is now.

Let’s start with AFL champion forward Nick Riewoldt – who knew he could cook?

“Her iconic style is sure to bring a touch of glitz and glamour to the competition,” says Ten in a statement.

Singer Dami Im is “swapping her microphone for a kitchen whisk” while radio personality Chrissie Swan could be “left speechless when she enters the MasterChef kitchen”. Comedian Dilruk Jayasinha “could have the last laugh”.

Acclaimed actors Rebecca Gibney and Matt Le Nevez “have warmed our hearts on the small screen” but “will they fire up our tastebuds”?

And the surprise celebrity, by a long shot? Tilly Ramsay, 19, the daughter of multi-Michelin star UK chef Gordon Ramsay.

A broadcast date hasn’t been announced, except to say the upcoming series 2 is coming to 10 And 10 Play On Demand.

Could the celebrities be tempted to cook these winners?

When MasterChef conversations come up at the dinner table, people still talk about this extraordinary French dessert made of choux pastry puffs, filled with creme patissiere, stacked inside a giant cone and covered in spun cotton. Contestants had to cook it in a pressure test to avoid elimination. It was a wild ride.

Melissa Leong thought this was a magical dessert. Season 12 contestant Reynold Poernomo’s Harry Potter-inspired dessert, The Snitch, has eight components and 32 steps. Don’t try it at home unless you’ve got three days. He made it in 90 minutes. “It is technical. I love the way the feathers bend in mid-flight. It’s triumphant … this is exactly what we live for,” she said.

Pork Wellington with Lattice Crackling and Flavours of Banh Mi 2021

This is what I’m talking about. It’s a Vietnamese spin on the classic pork wellington with lattice crackling, chicken liver pate and Banh Mi inside. Suffice to say it has 98 steps to go through before plating up.