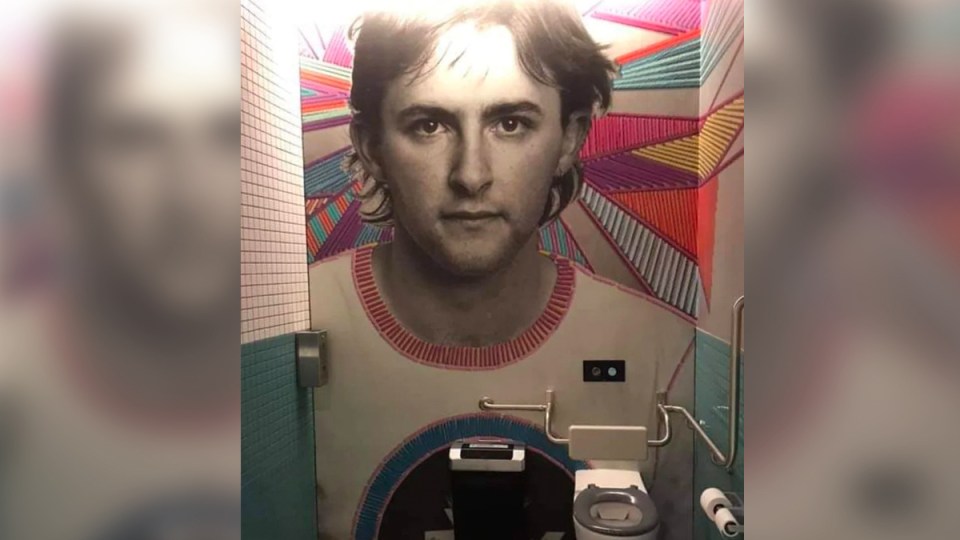 The idea for the giant mural was reportedly hatched two years ago and brought to life by local architects. Photo: Facebook

Opposition Leader Anthony Albanese has raised eyebrows, and a few lavatory seats, with his latest incarnation inside a female toilet block at his inner-Sydney electorate.

Claiming not to have known about the “very, very strange” life-size “hot” mural of himself – wearing a tight white T-shirt and aged about 20 with longish hair and an earring – Mr Albanese took to FM radio on Wednesday afternoon to explain.

Mr Albanese has held the federal seat of Grayndler in the inner-southern Sydney metropolitan area since 1996 and been Opposition Leader since 2019.

Molloy said: “Like, there you are, staring down like the eyes of God, watching people on the toot.”

Albanese replied: “Inspiration. Marrickville Metro only opened their big new centre … on the weekend. But a number of people have sent it to me and I think it is very, very strange indeed.

“They didn’t ask me for it, funnily enough.

“But it’s quite an artistic version of an old photo of me from 1985. It’s aged because I’ve got an International Youth Year T-shirt on. It was the day I became president of Young Labor so … full with long hair and an earring.”

Funnily enough, the posters were on display on his Facebook office page back in 2019.

Given it was World Record Store Day, Mr Albanese also impressed Molloy with knowing his music “stuff” when asked, saying he ventured into RPM Records at Marrickville on Friday.

“I bought a live double album of Bowie that has all the great songs on it as well as a cover of the Stones’ It’s Only Rock’n’Roll (But I Like It), which is particularly good, right at the end,” the Labor leader said.

“And I got a picture disc of The Cure, Faith, which is, I think, their third album.”

And to top it off, the first album he ever bought was Honky Chateau by Elton John, and the first live concert he went to was … get ready …

“I saw AC/DC at the first ever, I think it was, Sydney Festival that used to take place in January and it was down at Paddy’s Markets.

“The Young boys went to, of course, Ashfield Boys High School in my electorate for a little while. It was a great gig. And then I used to go to, there were quite a few free concerts when I was a kid, bands like Ol’ 55 and Sherbert, bands like that, Hush,” Mr Albanese said.

Young Anthony Albanese on the toilet

The inspiration behind the mural, according to The Australian’s Strewth column on June 16, comes from a group of architects The Bold Collective, who wanted to showcase “local legends who’ve had a lasting impact”.

“The idea to include Albo was sparked during Sunday sips at the Marrickville Hotel two years ago, where the hot Albo shot was on display behind the bar,” Marrickville Metro told Strewth.

“Whether you agree with the politics or not, the photo speaks to the true nature of the Inner West’s sense of humour.”

Mr Albanese isn’t the first politician to have a mural mounted in his honour.

The late prime minister Bob Hawke was featured, shirtless, on a mural on the side of Newtown’s Carlisle Castle Hotel in 2019.

Former US President Donald Trump in 2017.