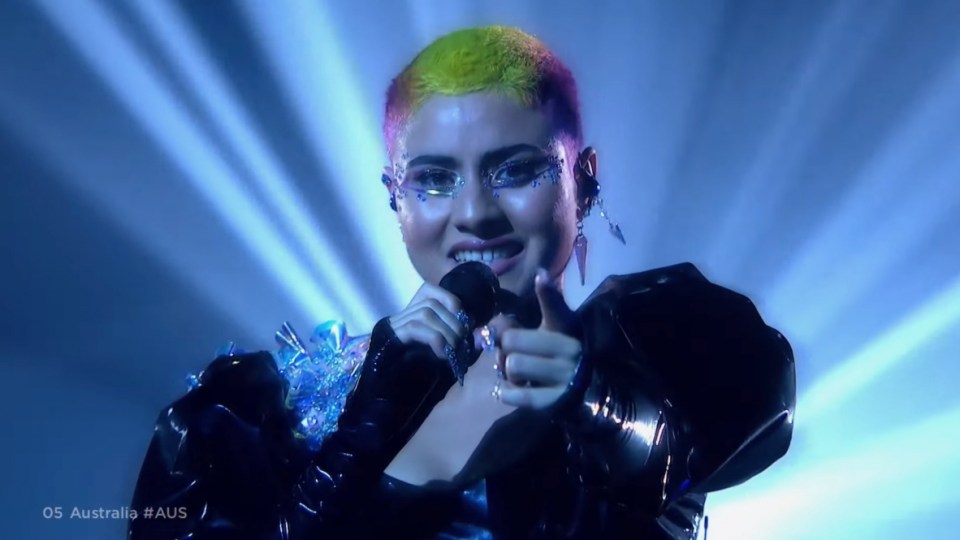 Australia’s Eurovision contestant, Montaigne, dazzled an appreciative audience in Rotterdam and said afterwards she was “stoked” with her performance, but has missed out on a place in the weekend’s grand final.

Eurovision announced the 10 countries who successfully progressed from the 16 acts in this morning’s semi-finals. The finalists included Lithuania, Russia, Sweden, Cyprus, Norway, Belgium, Israel, Azerbaijan, Ukraine and Malta. The results did not include the number of points for each of the acts. They will be released after the final’s result.

Dressed in a shiny black catsuit and sporting yellow and red hair, the Sydney-based artist earlier performed her song Technicolour  in a video screened at the competition early on Wednesday morning.

In her interview after the performance, Montaigne’s entourage held up both the pink and blue Trans Pride flag and the Australian Aboriginal flag.

The 25-year-old, whose real name is Jessica Cerro, was picked in February to represent Australia on the world’s biggest stage.

This year’s Eurovision contest, hosted by The Netherlands, is the 65th edition of the event, which draws a television audience of about 200 million.

After the 2020 event was cancelled, this year’s competition has become one of the most high profile live events to take place since the start of the pandemic.

A full-scale show was ruled out earlier this year but organisers said “cancelling again was never a consideration”.

“It’s all a part of getting back to normal. We always said no matter what happens with the pandemic we will have a song contest,” Martin Österdahl, Eurovision’s executive supervisor, told BBC.

Australia’s Montaigne dazzles in Eurovision debut, but misses out on final