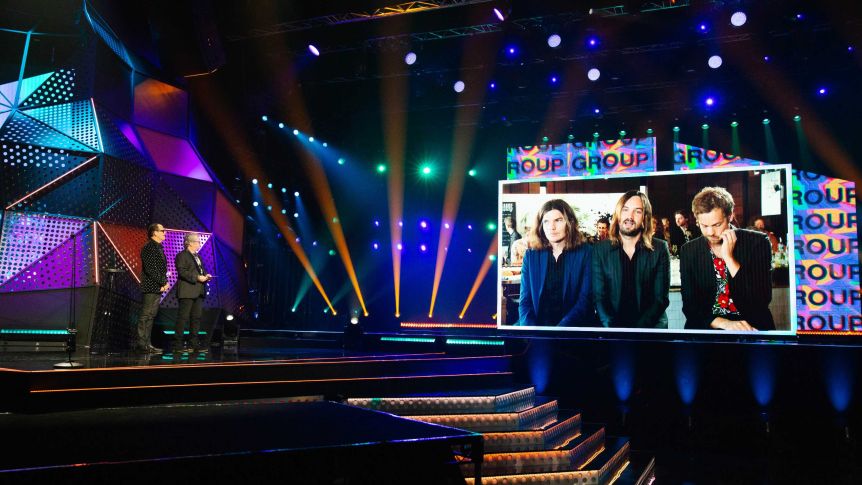 Most of the acts accepted their awards by video. Photo: ARIA

The live-streamed event, with awards presented in an empty convention centre in Sydney and accepted by artists largely via video from home on Wednesday night, was a chance for some celebration at the end of a tough year for the music business.

Tame Impala, the project led by producer and songwriter Kevin Parker, won Album of the Year – the third time it has done so – and Best Rock Album for The Slow Rush, the band’s fourth record.

It also won Best Group, beating 5 Seconds of Summer, DMA’S, Lime Cordiale and The Teskey Brothers, while Parker, who was meant to be touring Australia with the band next week, won Engineer of the Year and Producer of the Year.

Sampa The Great, the 27-year-old Zambia-born artist who first moved to Australia six years ago, won Best Female Artist as well as Best Independent Release and Best Hip-Hop Release, both for The Return, her 2019 debut album. She was nominated for six.

At the ARIAs, she performed from Botswana, where she was raised, beginning a version of her song Final Form by calling out the lack of diversity in the Australian music industry, which at the top is overwhelming white.

“Is it free, this industry, for people like me?” she said in an introduction to the performance.

“Diversity, equity, in your ARIA boards.”

Accepting the award for Best Hip-Hop Release, in a category she noted “often feels isolated and masculine,” she said: “Now we get to see a side of Australia that was never shown.”

She was up against four men: Briggs, Illy, The Kid LAROI and Baker Boy.

Sampa, who this year became the first artist to collect the coveted Australian Music Award for a second time, has previously criticised the industry for what she sees as a hollow commitment to cultural diversity.

One of the surprises of the night was the fact that Lime Cordiale, the young Sydney band led by brothers Oli and Louis Leimbach, won just a single ARIA, despite going into the night the leading contender with eight nominations.

Amy Shark was an early winner, picking up Best Pop release for Everybody Rise, which she performed to open the show, and Best Australian Live Act.

Roach was this year’s inductee into the ARIA Hall of Fame, his eyes wet with tears as he thanked supporters for their help over a 30-year career and performed Took The Children Away, one of his biggest hits.

Roach was also meant to be touring in 2020 – the same could be said for every nominee – but for him, it was particularly special: It was meant to be the singer’s last.

Instead, stuck at home, the 56-year-old rerecorded Charcoal Lane, the Paul Kelly-produced album that included Took The Children Away. He also worked on an educational resource to teach children about the Stolen Generations, of which he is a member.

The ARIA Awards also featured a tribute to the Australian singer Helen Reddy, who died in September.

Tones and I, Emma Donovan, Delta Goodrem, Mo’Ju and others collaborated on a version of Reddy’s US No.1 hit I Am Woman, introduced by former prime minister Julia Gillard, who spoke of the song’s significance as a feminist anthem.

The ceremony, hosted by Delta Goodrem, caps off a year in which touring, and even playing live in general, has proved difficult across the country.

The industry “fell off a cliff” in March, when pandemic restrictions were introduced, a parliamentary hearing heard earlier this month, with hundreds of millions of dollars in lost wages recorded.

ARIA has said it does not expect live shows, a critical part of the industry, to return full steam until late next year.

Here are the nominees, with winners listed in bold.

Album Of The Year

DMA’S – The Glow, Jessica Mauboy – Hilda, Lime Cordiale – 14 Steps To A Better You, Sampa The Great – The Return, Tame Impala – The Slow Rush.

Archie Roach – Tell Me Why, Guy Sebastian – Standing With You, Ruel – Free Time, The Kid LAROI – F-ck Love, Troye Sivan – In A Dream.

Amy Shark – Everybody Rise, Miiesha – Nyaaringu, Sampa The Great – The Return, Sia – Together, Tones And I – Bad Child/Can’t Be Happy All The Time.

5 Seconds of Summer – CALM,  DMA’S – The Glow, Lime Cordiale – 14 Steps To A Better You, Tame Impala – The Slow Rush, The Teskey Brothers – Live At The Forum.

Alex The Astronaut – The Theory Of Absolutely Nothing, Lime Cordiale – 14 Steps To A Better You, Mallrat – Driving Music, Miiesha – Nyaaringu, The Kid LAROI – F-ck Love.

Amy Shark – Everybody Rise,  Lime Cordiale – 14 Steps To A Better You, Sia – Together, Tame Impala – Lost In Yesterday, Troye Sivan – In A Dream.

Archie Roach – Tell Me Why, DMA’S – The Glow, Lime Cordiale – 14 Steps To A Better You, Nick Cave & The Bad Seeds – Ghosteen, Sampa The Great – The Return.

King Gizzard & The Lizard Wizard – Chunky Shrapnel, Parkway Drive – Viva The Underdogs, Polaris – The Death Of Me, The Amity Affliction – Everyone Loves You … Once You Leave Them, The Chats – High Risk Behaviour.

Busby Marou – The Great Divide, Frank Yamma – Tjukurpa: The Story, Lucky Oceans – Purple Sky, The Teskey Brothers – Live At The Forum, Tracy McNeil & The Good Life – You Be The Lightning.

Song Of The Year

Engineer Of The Year

Producer Of The Year