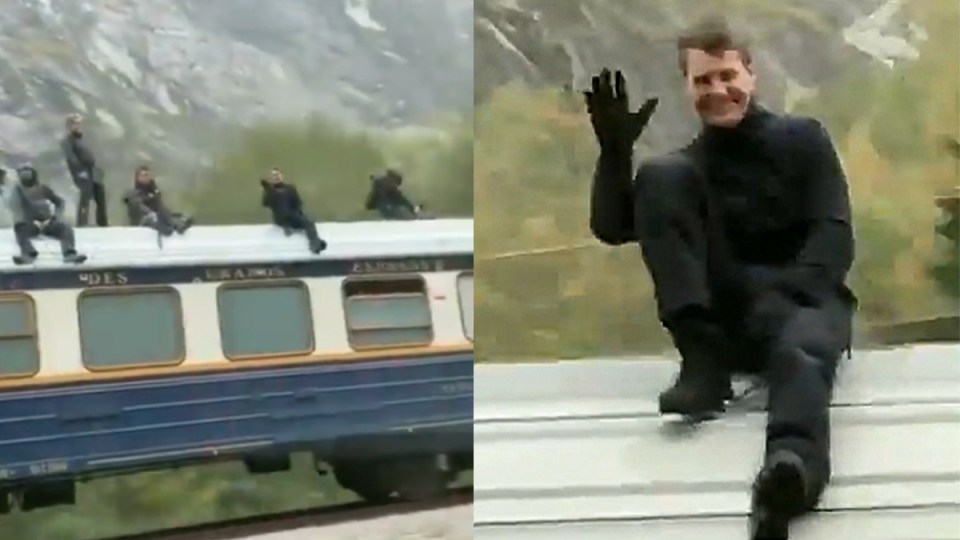 No stranger to doing his own stunts, Cruise's latest scene is on the roof of a fast-moving train in Norway. Photo: Twitter

Hollywood superstar and self-appointed stuntman Tom Cruise has been filmed riding atop a moving train in Norway.

Filming a scene for the seventh Mission Impossible instalment near Hellesylt, Cruise, 58, along with a swag of extras and film crew, waved to fans as they filmed him cruising at high speed on the roof of a fast-moving train.

Dressed all in black and looking relaxed, a smiling Cruise waved back to fans amid screams of delight and laughter.

Father-of-three Cruise, who is no stranger to performing his own stunts, was keen to wrap the movie. He even hired an old cruise ship for a cool $1.8 million for his cast and crew as the release date of November 19 drew closer.

Cruise, who plays Ethan Hunt in the hugely successful spy-thriller movie franchise, also reportedly flew down Mount Helsetkopen on a bike off a huge ramp days after a disastrous explosion on set.

According to the UK’s Sun newspaper, Cruise completed a skydive, flew a helicopter through London and performed “wheelies” on a BMW superbike during a high-speed car chase after filming resumed in April.

In 2017, Cruise broke his ankle while leaping from one building in London while filming Mission: Impossible – Fallout, the sixth in the franchise. That forced the production into hiatus for several months.

“During production on the latest Mission: Impossible film, Tom Cruise broke his ankle while performing a stunt,” Paramount said.

“Production will go on hiatus while Tom makes a full recovery. Tom wants to thank you all for your concern and support and can’t wait to share the film with everyone next summer.”

Cruise on the moon

In May, NASA confirmed Cruise had partnered with the space agency to shoot a movie, at least in part, aboard the International Space Station.

It will be the first narrative feature to be shot in space.

“NASA is excited to work with @TomCruise on a film aboard the @Space_Station,” NASA administrator Jim Bridentsine tweeted.

Cruise’s next film is Top Gun: Maverick, in which he reprises his role as Captain Pete “Maverick” Mitchell, a test pilot and flight instructor.

Due to the coronavirus pandemic, Paramount has moved its release from July 12 to December 23.