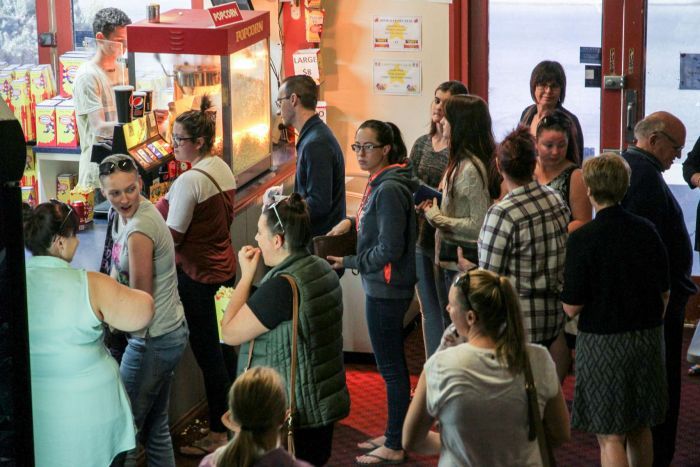 That was then: Cinema operators expect the crowds to return when the pandemic eases. Photo: ABC

Cinemas operators are broadly confident they can make it through the coronavirus shutdown, though some say relief from landlords will be required and some smaller, independent theatres may not survive.

The ban on mass gatherings to slow the spread of coronavirus has led to the closure of all cinemas nationwide.

Benjamin Zeccola, chief executive of Palace Cinemas, which has 17 sites across the country, said the company would soon need to borrow from the bank, leaving it saddled with an unhealthy amount of debt once it began trading again.

It is also not eligible for the federal government’s business support payments, Mr Zeccola said, because it had a turnover above $50 million.

“I just don’t see the need for there to be a cap,” he said of the grant scheme. “All businesses are struggling.”

He said turnover of that amount did not represent liquidity, and that cinemas, which have high staffing and infrastructure costs, operated on “wafer-thin” margins.

“The other area that is the most frightening thing for many businesses right now is landlords,” he said.

“We are on pause. Everything is frozen. There are no customers. There is no income. There can be no rent for months. And I don’t think that’s sinking in. I think the government has to step in to support employers.”

Hoyts, one of the larger chains, could not make anyone available for an interview, but in a statement said it was too soon to know for certain what the impact on the industry would be.

Independent cinemas may be most at risk

Kristian Connelly, who runs Cinema Nova in Carlton in central Melbourne, said while there was uncertainty for the business and its 50 casual and permanent staff, the cinema was well placed to survive the shutdown, largely because they were coming off a strong summer period.

However, he said: “I suspect that there will be a degree of rationalisation across the entire industry where we will see some closures.”

The smaller independents seem to be likely to be under greater pressure than some of the larger players.’’

Mr Zeccola agreed some cinemas would inevitably not survive.

Independents make up 31 per cent of all cinemas, the largest share, according to Screen Australia data, and account for most of the regional venues.

“So, when cinemas open again, and they will, we will need to vote with our wallets and go support our exhibitors and filmmakers.”

Scott Seddon, president of Independent Cinemas Australia and the owner of two venues in the Hunter region in NSW, said he hoped no independent cinemas would close for good, but that it depended on measures like rent relief, government assistance and forbearance from the banks.

“Many independent cinemas were badly affected by the bushfires because their towns were closed,” he said, meaning it had already been a tough start to 2020.

Cinemas would also need to make sure they could regularly fire up their projectors throughout the shutdown, he said, because older units particularly can degrade if they go several months without being turned on, potentially leading to a replacement bill in the tens of thousands of dollars.

It has already been a difficult decade for cinemas.

As the pressure from piracy waned, the arrival of Netflix, Disney+ and other streaming services made for a crowded screen entertainment market.

Box office sales were slightly down in 2019, according to a Screen Australia report.

Last year, before coronavirus emerged, some analysts were predicting minor growth in cinemas in the coming five years, while others saw a decline, with rising ticket prices failing to make up for a lack of innovation that would increase competitiveness.

Now, with film and television production having ceased around the world, some studios have started sending films that would otherwise have gone to cinemas straight to streaming services.

The Invisible Man, which has been topping box offices around the world but had its theatre run cut short, is already streaming, as is Emma, the Jane Austen story brought to screen.

Trolls World Tour will go straight to streaming, while Frozen 2 will have its release date pulled forward by three months and sent straight to Disney+.

But Australian cinema owners the ABC spoke to don’t fear that will become more common after the shutdown ends – that a long-standing norm about the primacy of the theatre experience will be shattered.

Already, major blockbusters like No Time To Die, the new James Bond film, have been delayed rather than rushed to streaming services.

And after a period of confinement, cinema operators say, the public will be itching to get out and experience storytelling on the biggest screen.

Mr Connelly said: “I think people are going to be reminded about how emotionally important cinema is not just to entertain but to connect.”

Cinemas view coronavirus as another storm to weather