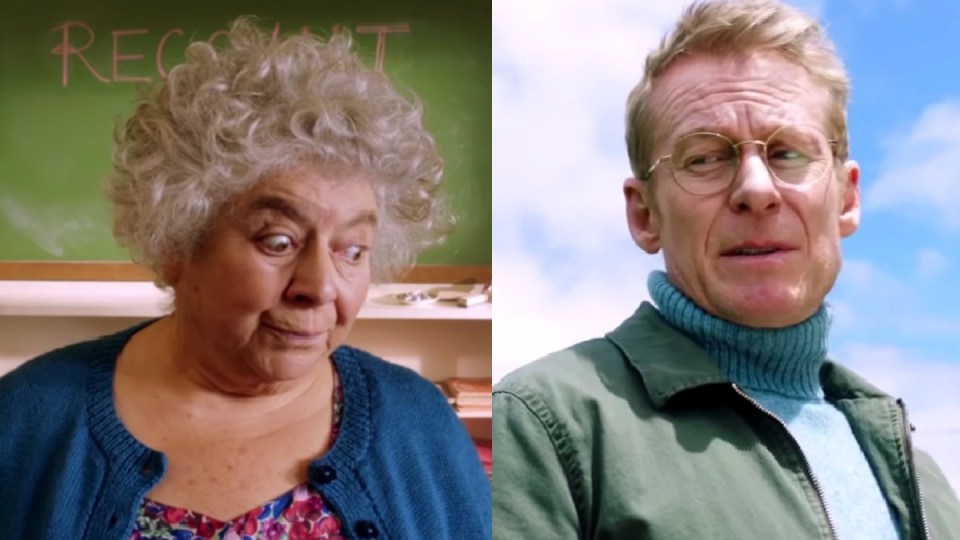 Miriam Margolyes and Richard Roxburgh star in H is for Happiness. Photo: YouTube

Having Professor Sprout from the Harry Potter movies on set is a godsend when working with a classroom full of kids, according to H is for Happiness director John Sheedy.

“God bless Miriam Margolyes. She’s not only funny on camera, but also brings a lot of energy to the set too, especially her farts,” the prominent theatre and opera director-turned filmmaker says.

“She loved farting in front of the children and had them in hysterics between takes.”

So much so it was a challenge, of the very best kind, getting young stars Daisy Axon (Judy & Punch), Wesley Patten and their onscreen classmates to refocus during the swift 30-day shoot.

Thankfully Margolyes was adept at corralling her young charges.

“She’d give them little history lessons and talk about her time on Harry Potter, so they were completely focused on her while we were doing setups,” Sheedy says.

Margolyes plays big-hearted teacher Miss Bamford, with a wildly oscillating eyeball and a boisterous laugh, in screenwriter Lisa Hoppe’s heartfelt adaptation of the YA novel My Life as an Alphabet by Australian author Barry Jonsberg.

Having wanted to work with her for a long time, Sheedy says he essentially wrote Margolyes “a long love letter” to get her on board and was blown away she agreed.

“Of course I was just gobsmacked. She’s absolutely charming, naughty and she warmed the children up beautifully. She treated that class like it really was hers.”

Axon plays Candice Phee, a character she loved from reading the book long before landing the film role.

A fiercely intelligent and independent young girl with bright red hair and a face full of freckles, Candice keeps Miss Bamford on her toes.

The new boy in school with a big brain of his own, Total Control star Deborah Mailman plays his mum.

“I’m biased, of course, because I love them and cast them, but Daisy and Wesley are phenomenal,” Sheedy says.

“They have a suitcase of talent, those two, and I think they’ve got big careers ahead of them. People just fall in love with them within the first five minutes.”

Both gleefully nerdy, Douglas is obsessed with finding a way into new dimensions, mostly by jumping out of trees, inexplicably.

Initially wary, Candice is intrigued by the potential of alternate realities as a possible way to make things right at home.

“I’ve always been attracted to creating work for families that hold some tricky and difficult themes and make that accessible to an audience of young people,” Sheedy says.

“H is for Happiness looks at first love, family relationships, loss and grief. And you know, that’s not something that’s usually presented to a young audience.

“So how you emotionally navigate through that is a challenge I enjoyed.”

The film narrowly missed out to Portrait of a Lady on Fire in the Audience Award category when it debuted at last year’s Melbourne International Film Festival.

Though there’s heavy stuff in there, it’s abundantly light-spirited.

That positive way of embracing life’s challenges jumped out at Sheedy when he read Hoppe’s script.

“It had a fine balance of humour and pathos. We sit in the tough moments, but then we step out and have a good laugh at ourselves. And I think that’s so important.”

Particularly given the times we live in.

“Australia produces a lot of tough, gritty films, and we do them very well, but there’s a lot of them,” Sheedy says.

“The world has become a very mean-spirited place at the moment and we’re losing our sense of humour.”

If we lose that altogether, we’re in big trouble, Sheedy warns.

“Films like Happiness allow you to look at that tough stuff while laughing and celebrating our flaws, our differences, and we need more of that.”

H is for Happiness is screening in Australian cinemas now

H is for Happiness: Behind director John Sheedy’s tale of love, loss and farts