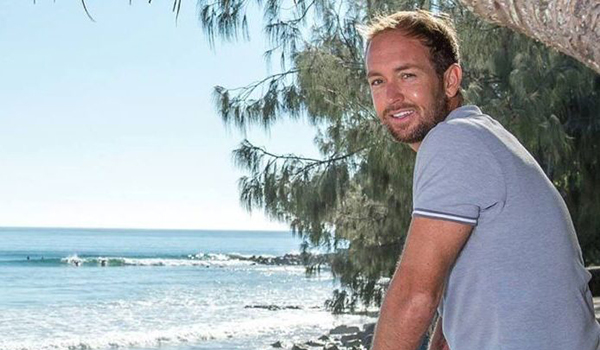 Jess Glasgow was dumped from The Bachelorette on Thursday night. Photo: Facebook

A Queensland councillor has been urged to quit over his “misogynistic, crude” behaviour on the reality television show The Bachelorette.

Noosa mayor Tony Wellington is calling on Jess Glasgow to resign immediately as a councillor, claiming his behaviour on the Channel Ten show was highly offensive and “arguably brought the council into disrepute”.

“Having now viewed last night’s second episode of the program, I have spoken to Cr Glasgow and told him to seriously consider resigning from his position as Councillor on the Noosa Council.

“Whilst I do not have the legal authority to remove a sitting councillor, he has arguably brought the Council into disrepute and undermined the good reputation of our Shire,” Cr Wellington said in a statement from Noosa Council on Friday.

Cr Glasgow, 37, made his entrance on the Channel Ten show on Wednesday night dressed in a regal-looking robe and carrying a throne.

He offered Bachelorette Angie Kent a key to “a town” when he was introduced.

“Don’t mind if I get some wandering fingers, all right,” he said to her in one scene.

She pushed him away, saying “What’s wrong with you?”.

Cr Glasgow was a controversial contestant, described as the “villain” of the series.

He was sent home before the second rose ceremony, which aired on Thursday night, due to “inappropriate” comments and gestures that were all caught on camera.

Angie stands up for the sisterhood once and for all 🙌 #BacheloretteAU pic.twitter.com/Yw6NMMnUWw

Cr Glasgow told the Kyle and Jackie O radio program on Friday he was unhappy about his behaviour but wouldn’t resign as a counsellor because it did not accurately reflect him as a person.

Cr Glasgow said he was trying to be jovial and reveal his “wild side”.

He has reportedly copped a torrent of abuse online following his Bachelorette appearance, in which he also made lewd comments about Ms Kent and allegedly hit on female production staff.

But Ms Kent leapt to the former contestant’s defence on Friday morning, telling the radio show that he should not be abused.

“I don’t need him to be online bullied, I can’t stand that,” she said. “I don’t wish him any harm or hate”.

“He can learn from this, hopefully, just learn to not talk to women like that if you want to make a connection.”

Cr Wellington said he will refer Cr Glasgow “to the Office of the Independent Assessor for an alleged breach of the councillors’ code of conduct”.

“Whether or not Mr Glasgow was simply performing for the cameras, he showed incredibly poor judgment in allowing himself to be filmed lying, being extremely and consistently disrespectful of women, and outright offensive,” the mayor said.

Cr Glasgow earlier told the ABC Sunshine Coast’s Rob Blackmore he had permission from “the boss” to appear on The Bachelorette after he was approached by its producers.

“They found me on Instagram and asked me … and said ‘you know you want to win this girl’s heart’,” Cr Glasgow said.

“I thought ‘why not? I’ll ask the boss for a few weeks’ leave and go have a go’ … it was just a bit of a spur of the moment thing.”

Cr Glasgow said his “boss” was Cr Wellington – who told him he “could choose whatever I like to do in my four weeks’ leave”, which Cr Wellington denied.

In the statement, Cr Wellington said it was not true that Cr Glasgow had received the mayor’s approval to appear on the show.

“After the first episode, I stated that Cr Glasgow would be referred to the Office of the Independent Assessor as a result of his behaviour bringing the Council and community into disrepute.

“Compounding this were untruths by Cr Glasgow told to the media suggesting that he had received the Mayor’s approval to appear on the TV program, as well as false statements about supposed accrued leave and pay entitlements,” the statement read.

There were frequent references to Cr Glasgow’s job on the show.

He introduced to Ms Kent as a person working in “local politics in Noosa, I’m a local councillor, so the one below the mayor” and said the key around his neck “might just be the key to our town … anywhere in Noosa and I’m giving it to you”.

But Cr Wellington said Cr Glasgow was not representing the council.

Noosaville Business Association president Joel Laventure told the ABC he was concerned about the impact of Cr Glasgow’s involvement in the program on Noosa.

“Any bad press isn’t good for Noosa – anyone living in Noosa would agree,” he said.

On radio on Thursday morning, Cr Glasgow said he was giving away only the key to his apartment and could not give away the keys to the shire.

“It was a bit staged, as you can imagine,” he said.

“Me being in politics, I gave the key to my apartment and my heart, not Noosa. I couldn’t do that, even I don’t have the key to Noosa.”

Cr Wellington concluded by stating: “Put simply, there is absolutely no room for vile misogyny and loutish behaviour in Noosa or in Noosa Council.”