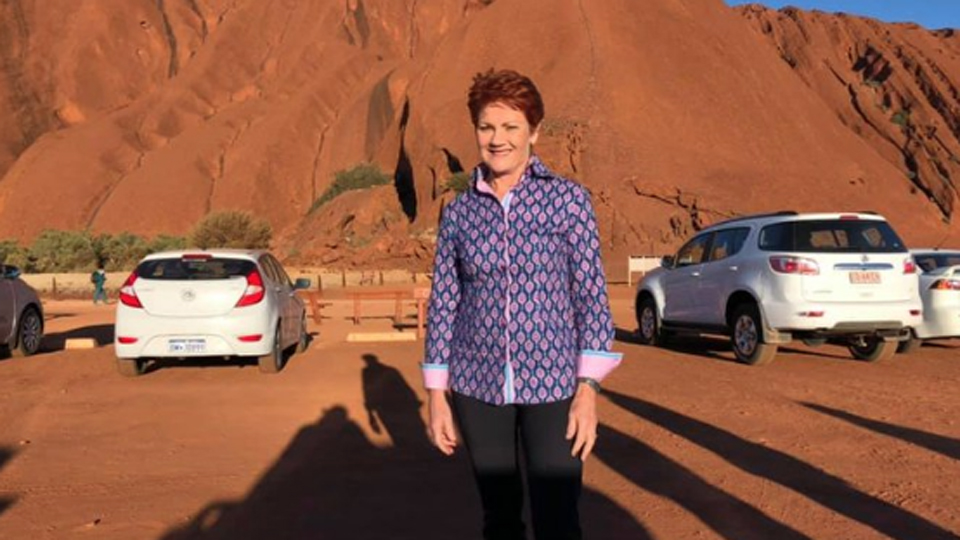 The Nine Network’s A Current Affair has dodged questions over who paid for One Nation leader Pauline Hanson’s controversial trip to Uluru.

Senator Hanson scaled the sacred rock as part of her campaign to keep the climb open.

However, a trailer for Monday night’s episode showed the senator getting stuck on the rock face apparently just 40 metres into her climb.

The traditional owners of the site, the Anangu Aboriginal people, and the Uluru-Kata Tjuta National Park will close the climbing route in October.

The senator’s decision to climb the rock came after she drew a parallel to closing the sacred site and closing Bondi beach.

Nine would not confirm to The New Daily if it had paid for the trip but did reveal that Senator Hanson had been the one to pitch the plan.

“Pauline Hanson has recently expressed a desire to attempt to climb Uluru after the announcement that local land owners would be enforcing their desire to prohibit people climbing the magnificent natural landmark,” a Nine spokesman said.

“Ms Hanson invited A Current Affair, along with local land owners, on that journey.”

In a Facebook post, Senator Hanson said the trip had not been paid for by the taxpayer.

A Current Affair defended its decision to film her journey, saying it would help Australians gain insight into the “significant debate”.

“The ACA team followed due diligence to ensure all permits were granted and the climb was approved, and engaged local elders who agreed to meet with Ms Hanson,” the spokesperson told The New Daily.

In the teaser, Senator Hanson can be seen walking up the rock without issue, until her boots appear to give her trouble.

“I’m not going up any further,” she said.

“Seriously, I cannot get down here. My boots are that bloody old.”

Getting stuck during her climb triggered a last-minute change of heart from the Senator, who now wants to see it closed for safety reasons.

Last Thursday she told the ABC she now understands why climbing on the rock would be banned.

“It’s quite scary. I was surprised. I’d never been out there before,” she said.

“I respect the decision that there is not enough safety with regards to the rock.

“I respect the decision that their people, their kids, are not getting jobs. They’re bringing in Aboriginals from outside to fill the positions that should belong to their own people.”

In 2017, the Uluru-Kata Tjuta National Park board voted unanimously to close the climb.

The decision, which was widely welcomed by indigenous leaders who said it would “right a historic wrong”, was followed by scores of tourists rushing to climb the rock resulting in complaints of rubbish dumping, trespassing and illegal camping.