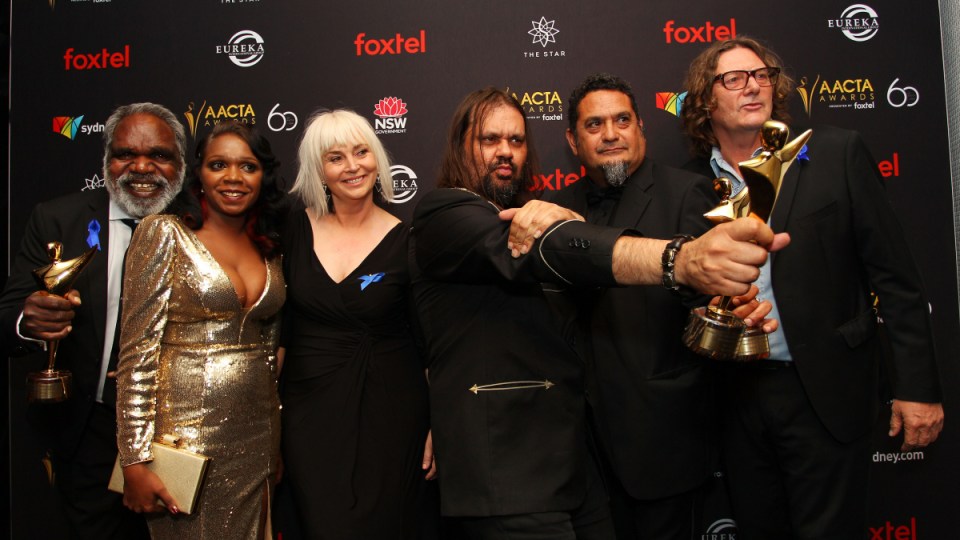 The cast of Sweet Country enjoy their success in Sydney on Thursday. Photo: Getty

Some of the biggest names in Australian screen have used the red carpet of the Australian Academy of Cinema and Television Arts (AACTA) awards to send subtle messages to politicians and the wider industry, but Nicole Kidman had a message for moviegoers.

The Australian actor took home the AACTA for her supporting role in Boy Erased, moments after urging audiences to look past the blockbusters.

Boy Erased, which was nominated for best film, is based on the true story of a teenager put through conversion therapy in the United States not that many years ago.

It was directed by Joel Edgerton, who appears beside Kidman and Russell Crowe in the film.

“You know, I’m also in Aquaman. That is not hard to get made. It’s a whole different thing and it’s nice to be fun.

“But this is where you go ‘please go and see these movies’ because otherwise we won’t have the chance to make them any more.”

The film was made in the US, but is nominated in the Australian AACTA awards because its director, Edgerton, is a local.

This year was the first time the Australian awards recognised an American film with substantial local input.

“I don’t know about bending the rules, I’m just grateful the film is being seen,” Kidman said.

Stars use red carpet to talk gender and immigration

A year after revelations about Harvey Weinstein and in the shadows of allegations of sexual harassment by Australian star Geoffrey Rush, several stars insisted times were changing for women in the industry.

On the red carpet, the sentiment on female participation was one of cautious optimism despite the categories for best director, screenplay, cinematographer, editor, sound and original score featuring only male nominees.

Kidman said women in the industry were “trying to carve paths that should have been carved years ago”.

“We’re all really uniting as women and as a culture and there are so many supportive men and we’re trying to make massive changes for the next generation as well.”

Janet King star Marta Dusseldorp said representation was “the only thing anyone is talking about right now”.

“I think it’s going the right way for my daughters,” she said.

“I sense in any writers room, in any situation I’ve been in in the last year or so, it’s always at the forefront of the discussions we have,” he said.

As expected, many stars wore blue ribbons to protest against Australia’s treatment of asylum seekers and to send a message to politicians.

“Get everyone off Manus. They shouldn’t be there.”

Australian actor Simon Baker was nominated for his directorial debut for the movie Breath.

He wore a blue ribbon on the red carpet, saying it was about both public awareness and pushing for political change.

“I guess in a lot of ways it’s to galvanise the politicians in this country to make a conscience decision as opposed to a political decision,” he said.

Indigenous man and Sweet Country director Warwick Thornton also wore a blue ribbon and had a powerful perspective on the debate.

“Literally every family has come here on a boat. You might have been born here, but your family came here once on a boat, maybe an aeroplane, maybe they walked across a land bridge in an ice age.

“We make sure we look after people who need help. How ridiculous is it in 2018 that we’re having this conversation?”

Thornton’s tough period western grossed more than $2 million during a year in which Australian films will gross approximately $50 million at the box office.

At the AACTAs, Sweet Country cleaned up.

Before the ceremony, Thornton said the biggest challenge in making the film was the tough Central Australian environment.

“Forty-five degree heat, scorpions and spiders, but it was the best time ever,” he said.

“To be part of the AACTAs is just an absolute beautiful recognition of the film.”

Veteran actor Bryan Brown was honoured with the Screen Industry’s highest accolade – the Longford Lyell Award – in a ceremony in Sydney on Wednesday in recognition of his career spanning more than 40 years and 91 roles.

Mr Brown made his screen debut with a bit part as a policeman in the 1975 movie Scobie Malone.

He was worked consistently in Australia and the US, and he has roles in two 2018 AACTA-nominated films.

He voiced Peter’s father in the part-animated Peter Rabbit, shot on location in Sydney’s Centennial Park, and he played a tough constable in Sweet Country.

On the red carpet, he told the ABC: “I still remember my first day and my first movie really,” he said.

“One foot in front of the other really. I hope there are another few feet.”