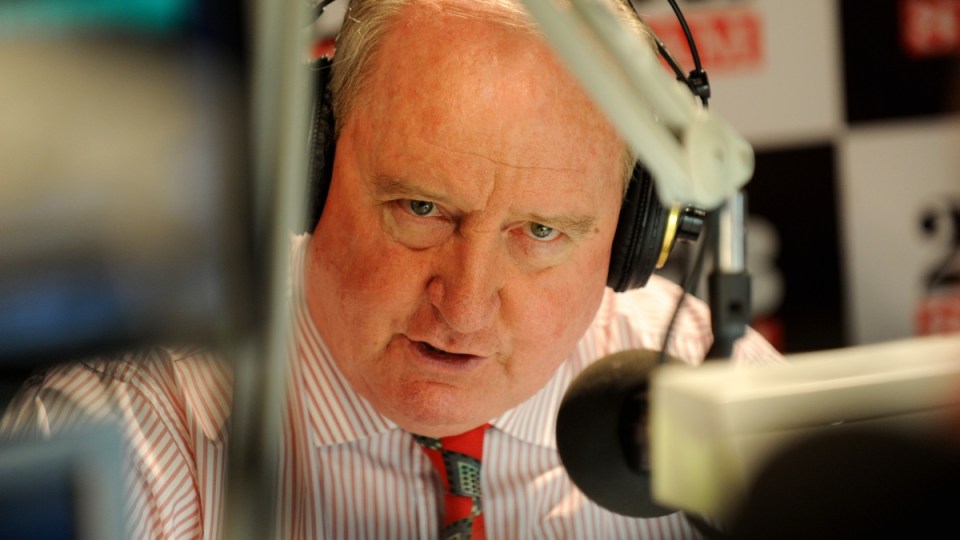 It’s not the first time Alan Jones has attracted controversy over using the N-word. AAP

Radio shock jock Alan Jones has backed away from apologising after angering listeners by using the N-word as part of a foul-mouthed rant about politicians on his 2GB breakfast show.

Instead, Jones said he “regrets” his choice of words.

The veteran Sydney broadcaster was discussing the Liberal leadership saga in Canberra on Thursday, when he used an offensive phrase live on-air: “The n––––– in the woodpile here, if one can use that expression”.

While it’s unclear whether it was directed at Finance Minister Mathias Cormann or Treasurer Scott Morrison, the slur sparked immediate outrage on social media and calls for people to boycott advertisers on the top-rating program.

No Alan, pretty sure you can’t use that expression. pic.twitter.com/B6X42t8GPH

“I used an old and offensive figure of speech that I regret saying. People should be honest and forthright in their actions and that is not happening in the Liberal Party right now,” Jones said.

He added, “I will have more to say on this tomorrow.”

The phrase, which originated in America’s deep south in the 19th century, was used to describe slaves who had fled their captors.

The suggestion refers to people hiding in stacks of pulpwood carried inside railway carriages during the era of slavery.

That email generated an automatic reply from Jones, saying he is broadcasting in New Zealand for the rest of the week and “wouldn’t have access to letters and emails” in his absence.

Users on Twitter said Jones’ remarks were “disgusting”, “racist” and called for him to be sacked immediately.

Alan Jones using N word on national radio is (4 most employers) a dismissable offence. Do your job @2GB873 & act. If u r proud/dismissive of extreme racist comments, then I urge those offended by that term to complain to the @AusHumanRights under #RDA @RosCroucher @AlanJones

It’s not the first time the shock jock has attracted controversy.

Back in 2012, he used the phrase “n––––– in the woodpile” to describe Malcolm Turnbull’s leadership ambitions.

The veteran broadcaster is currently being sued by the Wagner family, a prominent agricultural dynasty in Queensland, over comments he made in dozens of broadcasts in 2014 and 2015.