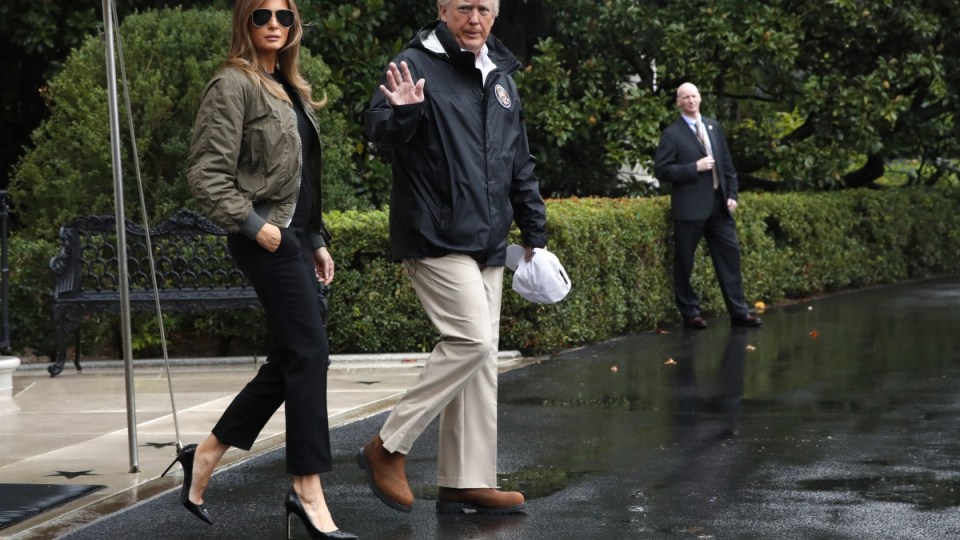 Dressing for a disaster zone clearly isn’t as easy as it sounds.

As Melania Trump found out when she boarded the Texas-bound Air Force One wearing an olive bomber jacket, cigarette-leg pants and snakeskin stilettos.

While clearly fabulous-looking, the First Lady’s choice of shoe, as she sashayed from the White House for a briefing on the devastation caused by Hurricane Harvey, saw scorn rain down on her.

As The New York Times saw it, the signature towering heels – reportedly Manolo Blahnik – were “a symbol for what many see as the disconnect between the Trump administration and reality”.

The fashion-forward heels, added the newspaper, were “another” visible sign that the Trumps “continue to define ‘appropriate’ in their own way”.

Politics writer and comedian Eve Peyser tweeted: “The chances of slipping seem astronomical. Hope the unpaid interns of the Secret Service are ready.”

Actor Zach Braff chipped in on the social media platform: “Melania headed to a disaster zone in stilettos is my Halloween costume.”

Even couture-obsessed Vogue waded into the controversy, asking why the Trumps “can’t get anything, even a pair of shoes right?”

Going on the front foot, the glamour site said Mrs Trump, 47, was heading to visit thousands of homeless Texans wearing “footwear that is a challenge to walk in on dry land”.

But even as the social media drums of scorn beat while she was mid-flight to Corpus Christi, Mrs Trump – who drew no ire when she wore a similar pair of heels, in orange, to jet to Camp David last week – worked to calm the troubled waters.

She changed up her mercy-mission style during the flight and stepped off the plane in a workmanlike white shirt and jeans, her ponytail pulled through a baseball cap identifying her station: “FLOTUS.”

The strong visual message from Mrs Trump to her critics was backed up by her communications director Stephanie Grisham.

“It’s sad that we have an active and ongoing natural disaster in Texas, and people are worried about her shoes,” Ms Grisham said in a statement.

That point resonated, and Twitter lit up with a backlash against the backlash.

Comedian Chelsea Handler, who bagged Mrs Trump’s heels in a Tweet, was herself attacked by First Lady fans.

The shoes are the first real misstep for Mrs Trump so far.

Her White House style has been high-end but suitable – flat sandals to host her Japanese counterpart in Florida, Dolce & Gabbana black lace to meet the Pope in Rome, sophisticated red Dior for Bastille Day in Paris.

Mrs Trump appeared to take the Melania-bashing in her stride. In a statement at the end of the day, she praised the “strength and resilience” of Texans.

“I want to be able to offer my help and support in the most productive way possible, not through just words, but also action.”